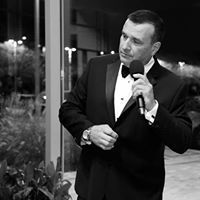 Bill Pantle has been entertaining crowds for close to 10 years now in Chicagoland's premiere Frank Sinatra Tribute act - "A Tribute To Old Blue Eyes". Bill's baritone voice and quick wit make you feel like you are in front of The Voice himself.

The show covers many of the classic Sinatra selections from The Great American Songbook and other popular Sinatra hits! Bill's background started out musical joining his Mother around the families piano listening to and singing along to classic standards his mother would play for him as a child. Then progressing to the local church choir and caroling during the holidays around his Uncle's Wurlitzer with his cousins and Mother leading the way.

The early influences of his parents love of Big Band music and classic crooners like Bobby Darin, Dean Martin, Sammy Davis Jr. and of course Frank Sinatra led him to grow to appreciate the classic sounds of a much different era.

Now this appreciation of standards of the 40's & 50's has turned into a full blown show highlighting The Voice and his antics while on stage. This tribute is a recreation of the classic variety show format or the infamous live recordings Mr. Sinatra was so famous for.

Bills music and sound of the big band era is worth hearing and created by some of Chicago's most talented musicians.

The big band sound is recreated by a heart pounding 17 - 20 piece big band orchestra. Chicago's very own Big Band Boom! or Shout Section Big & Mini Band can be found creating the music for Bill's show on any given night!