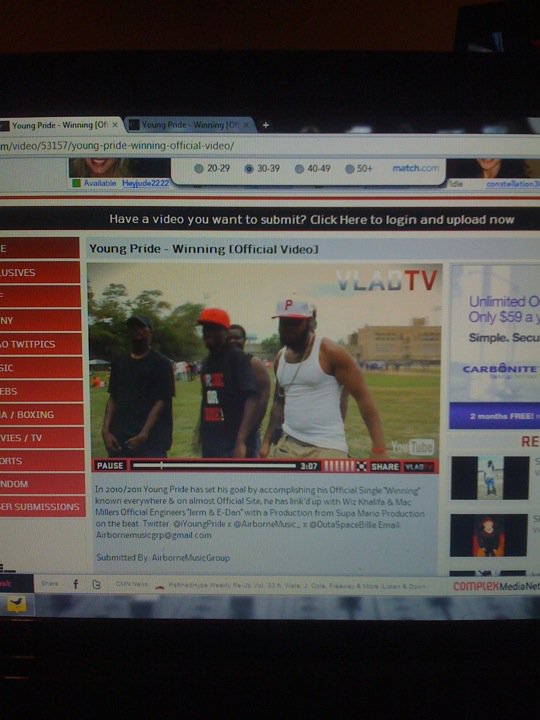 Born April 28 1989 In Garfield Heights Projects. Pride Rivers, known as “Young Pride” would be introduced to the music scene at the age of 13, by uncle George Benson, A major label jazz musician, who would then teach pride about verses and hooks. In and out of the studio for a couple years the young rapper would grew smarter and stronger at his hobbies. neighborhood mixtapes and talent shows helped him create a street buzz around the neighborhood.

Rapping with brother and friends would also help pride gain experience, but it took until the age of 16 for him to master his flow. He would then develop his first demo and begin shopping it around to indie record labels. After getting the feedback, Pride found out he wasnt what the labels were looking for

The young rapper would then study and correct the errors of his bars and punchlines and combine his new style of writing and delivery with his pittsburgh swagger to create a style that he calls “like no other”. Filling up notebook after notebook, growing stronger each verse, the young pittsburgh rapper would then move to Frederick MD to live with uncle and aunt.

Making this best of this opportunity, Pride would use this chance to expand his fan base. after releasing a 5-track demo to selective friends he would then slowly become known as the pittsburgh rapper around his new town. Meeting new friends with similar ambitions they would then start a group named “M.O.B”. The group would go on to drop several albums around schools before each artist went there seperate ways.

Pride back to being a solo artist would begin to network his tracks with similar style artist and gain exposure doing events When fans would over look the name “Young Pride” on flyers and such because his low profile, His uplifting energy mixed with his unique style continues to catch the crowds attention quick.

After 2 years he would then move back to his home town of Pittsburgh and begin to work on his highly anticipated album “The Main Event” with such singles as “Do It Like Me” and “Fresher Then A Mufucka” blazing around the internet.

While the young rapper continues to build his fan base from city to city. Pride now wishes to make the industry come to him this time around. Gaining more experience as his shows pile up, it wont be long until Major Labels start looking his way.

"before even the thoughts, of being a rapper came to mine. He's came

into the music industry by becoming a young "promoter."

In 2oo4, Billie came together with his uncle salt known as "Salt
Shaker Productions" on a major event in Pittsburgh,PA main arena such
as "Mellon Arena/Penguin Home". They've hosted a big event they have
thrown in PA with Few local artist in Pittsburgh. We have also brought
"Gorilla Zoe , Yung Joc , (Block Entertainment) , Soulja Boy & more.


In 2oo7, Billie was introduced to the hip-hop world under Airborne
Music Group. Since then Billie began to charge the industry as a young
promoter in the game. He was welcome by "Diplomat Records" own "A-
million" as his official Promoter/booking agent.

In 2o1o, Billie an a few young guys from his Neighborhood join
together an made a music group such as "Airborne Music Group" known as
"Sky High". These, young guy's first ever start hitting the studio
together they was making gold recording down "ID Lsbs" in
Pittsburgh,PA. They've linked up with "Wiz Khalifa" engineers "Jerm &
E-Dan".

Once they've felt comfortable with those guys they felt that that was
there second home by coming down there recording new hits.

In 2o1o/2o11, Billie link up with Defjam/C.T.E Recording artist "Blood
Raw", after his big hit single "Louie Bag" has drop on they label.
after blood raw has left those labels blood raw form his own movement
& grown known as "Blood Raw Entertaient". He's join they label as not
just they go to guy wen it comes to the promotion but also they
booking agent as we'll.