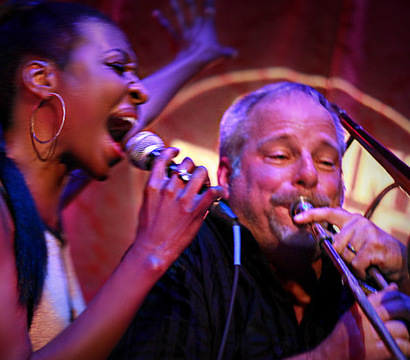 Funk roots run deep - all the way to Hermosa Beach, California - where a group of some the most sought-after backup musicians in the business is creating a stir in a New Orleans-flavored funk band called Alligator Beach.

After years of gigging as a trombone player, Keller reached out to other sideman pros he’d played with over the years and pulled together an “A-list” of world-class musicians that call themselves Alligator Beach. The band is a soul/funk party band that has a steady following on the West Coast, including a jam-packed residency at the iconic blues venue Harvelle’s in Santa Monica.

Their live show delivers serious heat, with a full horn section and lead singer Carol Hatchett belting NOLA-flavored arrangements of classic songs like the BeeGees “You Should Be Dancing”, sprinkled in with their own original material.

When they host a record release party Saturday, Aug. 24, at Saint Rocke in Hermosa Beach, Keller said there will be no love songs, it's all about “having a good life.” Their first album, “Throwin' a Party!,” will be released on Spotify on Thursday, Aug. 22.

Keller had been a trombone player, maybe the “sixth or seventh guy in the band,” when about five years ago, a friend convinced him to start his own band. It took him a couple years to find the right combination of band mates, especially a singer. He found Carol Hatchett at a jam session in Beverly Hills. From the beginning, he said, he wanted the band to be dynamite.

“I'm not going to put together a whatever band with my friends and whoever are around,” Keller said. “I want this to be a thing... I'm going to put all of my energy into it. It's got to be something that I can say 'This kicks ass,' with no apologies.”

While attending high school in Poughkeepsie, New York in the early 1980s, Keller's friends were starting a punk band. He wanted to play his trombone in the fledgling band. They ended up opening for the Beastie Boys at Bard College in 1982 when the Beastie Boys were a punk band.

But then two concerts made a difference in his musical career. First, while in high school, he was impressed with the R&B band Tower of Power's prominent horn section.

“As a horn player who kind of liked The Beatles, I really didn't see how I fit in the world of music, but (then) I saw Tower of Power,” Keller said.

Then he saw the Neville Brothers in college.

“Just the rhythm of it really got me ... it set the stage for what I'm doing now,” Keller said.

Up until the formation of Alligator Beach, Keller had been part of swing, reggae and R&B bands as “just one of the guys.” But now with Alligator Beach, he is the main songwriter and sings about half the songs, along with Carol Hatchett.

“I consider myself more of a songwriter than a performer but … this is kind of putting everything together,” he said of Alligator Beach.

Keller added, “Just having this group of people to write for is my muse.”

“Throwin' a Party!” includes nine original songs and two covers including Led Zeppelin's “Whole Lotta Love” and “Fire on the Bayou” by The Meters.

“We switch them up and take them to New Orleans,” said Keller.

Alligator Beach, Keller said, has a regular gig at Harvelle's in Santa Monica the first Saturday of the month, where they perform two 90-minute sets. They also performed at the last Fiesta Hermosa on the main stage.

Alligator Beach performs at 7 p.m. at Saint Rocke on Aug. 24, followed by The Spazmatics at 8 p.m.

“We got them to bounce,” said Keller, of the crowd at Fiesta Hermosa, which he said is their goal for any gig.

If there had been rafters, fans would have been hanging from them.

So what is Alligator Beach’s secret? I think it is word-of-mouth.

I interviewed fans during the break to find out what brought them to Harvell’s and see Alligator Beach. Many told me that their friends had been to an Alligator Beach gig and loved it. Some told me that they were at Harvell’s with friends who had seen the band in other places and were hooked. And interestingly, many fans I talked to said it was personal conversations that moved them — friends calling friends and raving you must come and see this band. Over and over I heard the words “my friends told me about them.”

Alligator Beach is the creation of Lance Keller who is joined center stage by singer Carol Hatchett, recruited by Keller at a gig and now a full partner in the project. The band lineup can vary with the performance, but Sunday night in addition to the two of them and Oxford, they brought in the superb talent of Jimmy Z on sax, Byron Holley on drums, BR Millon on guitar and Mick Linden on bass. All of these musicians are top-notch and have local fans — a requirement as any musician knows when it comes to filling a hall.

The result was pure musical party fun – exactly what the word-of-mouth promised. And the fulfillment of that promise means more word- of-mouth. Of course there will be hundreds of videos posted online, FB checkins, Instagram selfies with the band in the background, and “stories” with people swaying in front of Keller’s trombone or Carol Hatchett swaying to it onstage. But if what people told me is true, there will be are lots of conversations either on or offline saying this was so much fun and you have got to come next time.

It is interesting and in some ways gratifying that people talking to people can help drive a band’s success in the digital age. Which is not to say that Binx should abandon her web conversations or ZZ Ward neglect her Instagram feed or Halo Circus stop chronicling their current tour on Twitter. But I think it does mean that Sunday night I saw a perfect storm of success – a terrific band with a local fan base in an iconic club with its own following, joined by a popular sit-in player with her own audience, all accelerated by word-of-mouth enthusiasm that practically drove people to Santa Monica. If only there was a way to bottle that storm. ~ Patrick O'Heffernan, Artistic Echoes

Only a fool would miss the big party AB is throwing on April 1.

We are the early show for the Fiesta Hermosa Beer Garden. We go on at 11am Monday morning. Labor Day, doncha know. Join us for a funky good time!

The French Quarter in Bellflower

It's Fat Tuesday y'all. It's an all ages, carnival, festive, Creole food extravaganza. This is the place to be for Mardi Gras! Fextivities start at 4. Band starts at 6.