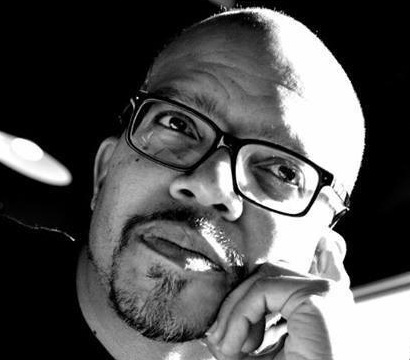 A veteran of various forms of public speaking, Analysis is a poet/spoken word artist, organizer, activist, minister, educator, consultant, bookseller, soccer addict and a lover of justice and human rights! He’s featured and spotlighted at venues across New England and the Mid-Atlantic. A background in civil rights, economic justice, anti-apartheid and anti-racist organizing, education, progressive ministry, justice theory and international travel manifests itself in his poetry, as does a love of radical history, family, and people in general. There’s also a naughty side that comes out now and then! A native of Baltimore, Maryland, he studied Public Communication at the American University and holds a Master of Divinity degree from Howard University, where he graduated with highest honors. Analysis is the host of Red Emma's Mother Earth Poetry Vibe, and a member of Simply Poetic Entertainment. His chap book of poetry, Somewhere Through the Haze, is a short collection of pieces on a variety of justice/human rights topics. Connect with him for feature sets, full performances, emceeing, keynotes, consulting and more!

Emily Dickinson famously said, ‘If I feel physically as if the top of my head were taken off, I know that is poetry.’ Analysis cuts heads. –Pamela Murray Winters, poet

This November, let's fall into something new—specifically, the exciting brand new location of Red Emma's! We're back in Mt. Vernon, right in the heart of the Cultural Center, and ready to bring the poetic excellence to you as we always do. Join us for an open mic of justice, conscious thought, spirituality, fam, real life—whatever advances the village! In the tradition of Emma Goldman’s “Mother Earth” magazine, come drop some rad “fiyah” on us, or contribute just with your presence and energy! [By the way: it’s a non-erotic venue, so rather than a love/erotica evening, we focus this night on justice and other matters of life. And, almost needless to say, leave the misogyny, homophobia and other unnecessary ish outside!]

Our lead-off feature in our new space will be Kimberly Jae! Born in New Orleans and transplanted to the East Coast via Hurricane Katrina, Kimberly Jae is an actress, director, playwright, slam poet, educator, mother and cancer survivor. Kimberly began her career in the arts attending the famed New Orleans Center for the Creative Arts, and later received her BA, teacher and principal licenses as well as a Masters in Education. K founded The PlayGround Children’s Theatre Company in 1998 while still in college. Writing and directing children eventually morphed into teaching teachers how to teach children using theater, and finally into teaching and school administration, in which she has served as a principal of K-8 charter schools. Kimberly is the 2018 Grand Slam Champion of Steel City Slam (in Pittsburgh), 2018 BOSS Slam “Queen of Slam” Champion, 2018 Steel City Slam representative to the Individual World Poetry Slam (IWPS), two-time Pajama Jammy Jam Slam winner as well as a 2018 finalist for Baltimore's Slammageddon slam team. Kimberly is also being published in early 2019 by Finishing Line Press in their upcoming cancer survivor anthology, “Anthology for Young Adults with Cancer.” When not writing or slamming, Kimberly cooks whatever comes into her imagination, and has recently opened a restaurant called Southern Slider Bar!
https://artistecard.com/KimberlyJae

(Mature language and themes may be involved; not suggested for younger children.)

The evening is brought to you by Red Emma’s Bookstore Coffeehouse, a worker-owned and collectively-operated restaurant, bookstore, and community events space located in Baltimore's Mt. Vernon neighborhood that is dedicated to putting principles of solidarity and sustainability into practice in a democratic workplace! Here you’ll find delicious, transparently traded, organic coffee, espresso and tea, as well as a selection of vegan and vegetarian food. Get here early so you can check out the books and periodicals on a wide range of topics, with a focus on radical politics and culture. Plus, there’s free internet access!
http://redemmas.org/ https://www.facebook.com/redemmas Twitter & Instagram: @redemmas

Remember: PEACE, JUSTICE, POETRY!! Will we see you there? :)