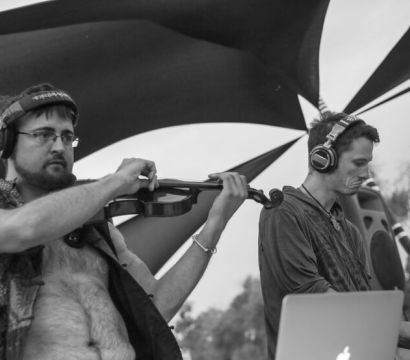 First there were the dinosaurs. None of them were very good DJs and only the T-rex could play the Violin. Luckily, some bad weather (a meteor) came and wiped them all out.

That's when Mammals saw their chance. They came out of the caves and started throwing poop and increasingly epic parties. Another Monkey saw what was going on and said, "Sure, we can do those things."

Since then, Another Monkey has seriously cut back on chucking lumps of feces and can happily report that their epic parties are only becoming more so. The rest is basically history.

- They are a live Violinist and DJ duo that improvise classically trained and modernly performed violin accompaniments to sets of House, Techno or Drum & Bass. The DJ & Violinist work together seamlessly to create build-ups and climaxes that accentuate the individual identity of each song. Every set is a journey through relatable emotions, intuitive transitions, and is entirely improvised.

When they are not performing at festivals they love to produce their own as well as contribute to the visions of others. Combined, they have helped throw more than 7 boutique and transformational outdoor camping festivals since 2013. -

We'd love to hear from you.
Information Request