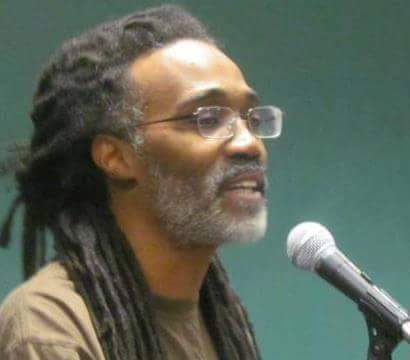 Billy Tuggle is a South Side Chicago native; a writer, vocalist, performance poet and event producer; a mentor, an activist and HipHop culturalist; recorded, published, a poetry slam champion.

Also known as Karma Threesixty, Karmadelic, Karmaquarius, as a youth cofounded the HipHop collective STS in Chicago's "southlands" which was the basis for his brand of urban cultural activism and mentorship. Engaging in independent journalism within Chicago's underground HipHop scene in the 90s earned him places in publications like Underground Weekly and Chicago Rocks Magazine. Through most of the 90's, Billy was the HipHop product merchandiser at the Midwest's flagship Tower Records. From 1997-2002, was a street promotions co-ordinator for Rawkus Entertainment, earning gold plaques for the promotion of Mos Def and Big L albums.

Billy's history in performance begin in his teen years where he fronted several funk/rock bands with overt reggae and HipHop influences. While the bands never took off, Billy's writing hobbies of sci-fi and lyricism turned journals full between auditions. Music and poetry open mics and the Revival Tent at Lollapalooza '94 put him on the path to become a performance poet and spoken word artist. Over the years, he has applied his decidedly urban, unappologetically HipHop style and spirit into most all of the work he has place on stage and in market.

Rocking... tags, lyrics, records whatever... theses are traditions, activities, pillars of our commuinity but simple reflections of the mindstate. Those are things that we do. We LIVE HipHop.

Growing up a graffiti writer, breaker, beatboxer, material supporter of HipHop prepared Billy for the ups and downs of being an idependent artist; he hoped to live, learn and educate with his art and be subject to as few corporate dictates as possible. This was realized through a post-"formal" education apprenticeship with the Temple of HipHop. From 1996 to 2008, Templists formalized HipHop culture as a spiritual, educational and revolutionary persuit, formalized in the publishing of 'The Gospel of Hiphop: First Instrument' by KRS-ONE. Billy has since created his own HipHop studies curriculum sketch- '7 In a Cipher' or 7IC- and created the culturalist blog Sanctuary Threesixty.

Billy's verbal prowess and lyrical background made him an open mic rat and a natural for the game of poetry slam. Following his Revival Tent experience, he eventually attended the Uptown Poetry Slam on occasion but found a home in Chicago's 2nd long-running reading and slam series Mental Graffiti. Over a decade as a regular across Chicago's slam scene placed him on area teams competing in events such as the National Poetry Slam.

Billy's experience in slam and HipHop combined have given him the opprtunity to perform across the United States and Canada; deliver workshops on short verse-writing, poetry performace, touring and HipHop cultural study. In 2009, Billy and Andi Kauth-Rufos founded the Chicago Four Star Poetry Club. He has independently produced three recording project releases; indepedenly published 3 collections- 'The Way of the B-Boy'; '476'; and 'Incantation.' His work has also been anthologized in 'True Port' [Red Bench Press]; 'Learn Then Burn' and 'Learn The Burn 2' [Write Bloody Publishing]; 'Not My President' [ThoughCrime Press]; and 'Escape Wheel' [great weather for MEDIA]. Bully has also been published in such journals as Columbia Poetry Review; Bestiary; Haiku Journal; Failed Haiku; the Bored Friday Project; Hawk & Animal; WusGood.Black; Caravell Journal; and The Knight's Library- whom nominated him for the 2020 Best Of The Net anthology.

On video, Billy has also been captured by McGraw Hill Publishing, and popular online portals Button Poetry and All Def Digital/All Def Poetry.

In slam, Billy has been on more nationally-competing Chicagoland slam teams than any poet [12]. He is a 4-time Chicago Grand Slam Champion; was 2006 Rustbelt Regional Slam champion and 2008 finalist both with Mental Graffiti Chicago; 2x National Poetry Slam semifinalist- 2006 & 2008 with Mental Graffiti; 2x Arkansas Grand Slam Finalist. Billy is the 2015 NPS Head To Head Haiku Champion and 2009 ARGS Head To Head Haiku Champion. He has coached 4 NPS squads including 2013 NPS semifinalists Mental Graffiti. Billy won the 2016 and 2019 editions of W4TB Poetry Pentathalon; he won the 2020 National Virtual Slam [Lyrically Inspired] Championship as well as appeared in the League of Legends Slam. Billy was nominated for Slam Artist of the Year, 2020 National Spoken Word Awards and was recognized by Odyssey Online as one of the "Top 30 Slam Poets Over 30."

Some diverse venues Billy has performed in:

Billy Named One of Top 30 Slam Poets Over 30

Decatur, GA; Billy hosts H2HH, one of the NAtional Poetry Slam's most popular daytime and "side" events

In One Ear opens the Heartland Cafe Stage for the daywith NIKKI PATIN, THE MIXTAPE & AMANDA LYNN DEAL.

INDIANAPOLIS Julian Center benefit with Wil Gibson and many more

You can find the HipHop culturalist blog at sanctuarythreesixty.wordpress.com/
Information Request