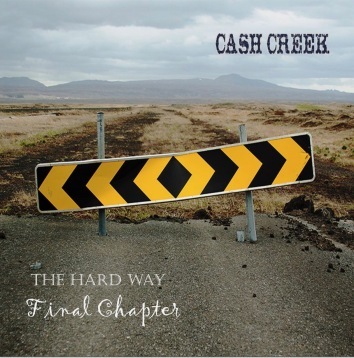 12/22/2017 Offical lyric video for the upcoming worldwide radio release of "Make Your Momma Proud" released  to the public on the worldwide web.

12/15/2017 "The Hard Way, Final Chapter" Availble worldwide on most digital outlets and at www.heartlandrecords.net

09/04/2017 The Hard Way chapter 2 availble world wide at most digital outlets and at www.heartlandrecords.net

From the downbeat of their first song, you’ll realize this is unlike any country band you’ve ever heard before. Their sound is a unique blending of big vocals and big guitars, with a healthy dose of fiddle, and mandolin mixed in for good measure. The songs and production are of such a high-caliber, it’s hard to believe this project is self-produced. With it’s distinctive sound and hook laden tunes, you will be driven to listen again and again.

Although Cash Creek is a relatively new band, it’s members have enjoyed long histories and friendships together, some going as far back as the fifth grade! Each has carved out their own niche in the music industry as entertainers, road and session musicians, producers, and songwriters. When they formed what is now the band, they knew they wanted to create a sound that would reflect a common vision, and maintain a cohesiveness that would be instantly recognizable, regardless of the song. Well, one can safely say, mission accomplished!

The members of Cash Creek are seasoned professionals with experience at the highest levels. The list of artists they’ve worked with reads like a “who’s who” in Country Music, including Brad Paisley, Taylor Swift, Trace Adkins, Alabama, Hank Williams, Jr., John Michael Montgomery, Josh Turner, David Lee Murphy and many more. Needless to say, they know how to play in the big leagues.

Witnessing a Cash Creek show is a pure pleasure. Writers and critics use phrases like “high energy”, “strong stage presence” and “charisma”, which Cash Creek has in truckloads, but it’s their ability to make it look so easy and seem to truly enjoy what they’re doing is really what is so engaging and entertaining about this band.

Geographically, Cash Creek runs “all over the map”, with it’s members originally hailing from California, Ohio, Pennsylvania, and Kentucky. Musically, they come from a place where, razor-sharp musicianship, seamless harmonies, and top-drawer songs flow into years of experience and a true passion for what they do. It’s a place called Cash Creek!

The offical lyric video for the upcoming radio single "Make Your Momma Proud" released to the worldwide web.

The 3rd Ep from The Hard Way trifecta - "The Hard Way, Final Chapter " available worldwide from most digital outlets and at www.heartlandrecords.net

The New Ep "The Hard Way chapter 2 Availble worldwide at most digital outlets and www.heartlandrecords.net

"Worth A Woman" released nationally to Radio

"Worth A Woman" the second release off the acclamed album 'Miracles" released nationally to Radio Stations.

Cash Creek, the new Album “Miracles” and the new Single “Even Angels Have Bad Days”
Have been submitted in for the 58th annual Grammy Awards!

Cash Creek has a On Air interview at K-Law FM in Laawton Oklahoma.

Early reports from promoters "We are getting good responce

from all the PDs that have listened to it."

With Jerry Duncan Promotions working this song to radio and a

"Even Angles Have Bad Days" in the Top Five downloaded songs in the country from MPE for the 2nd day in a row.

Even Angles Have Bad Days is in the Top Five

Heartland Records, with offices in Nashville and Kansas, has signed
Nashville recording group, Cash Creek, to their label.
Cash Creek is comprised of five seasoned entertainers, session players, and songwriters. Their new self-produced CD, Miracles, is a combination of great songs, production, and a contemporary sound with big harmonies.
They’ve shared the stage with artists from Alabama, Taylor Swift, Brad Paisley and many others. Cash Creek is now ready to take their high energy show to the next level with Heartland Records. Get ready, because the creek is rising.

HEARTLAND RECORDS Re-releases "It's All About The Money

For Booking info email Heartland Records at
Info@heartlandrecords.net
Or call us
(615) 530-1038
Information Request