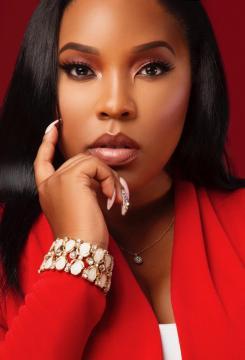 Soul sensation Chanel B is an American R&B singer, songwriter and music executive who is  on the rise. Chanel B born Chanel Brown is not only a recording artist and performer but she is also currently the President/CEO of Atlanta's very own LONDON RECORDS. Chanel has made an impression on the music industry with the launch of her debut single, “KNOWING” which is a sultry love song that’s has been making waves online and with digital streaming sites.

A native of upstate New York, Chanel B has been enthused about singing since she was the tender age of 3. Like most soul artist, Chanel B was reared in the church. Her grandmother, was a minister who along with her grandfather who inspired Chanel B to use her gift that GOD had blessed her with, her angelic voice.

Taking note from her family Chanel B, began to gain recognition performing around town and participating in several contest. Chanel B was nominated for a Rochester Broadway Theater League (RBTL) Award for Best-Supporting Actress for her role in “Leader of the Pack”.

Chanel B continued to hone in on her craft while gaining national attention. It was in 2014 that Chanel B received her greatest breakthrough as a contestant for X Factor on the FOX NETWORK.

Chanel’s momentum became endless, in 2016 she was the opening performer for SUMMERFEST, an annual music showcase that features top R & B legends like SILK & The S.O.S BAND.

Since relocating to Atlanta, GA Chanel B has performed at many hit festivals and concert series, including the historic Sweet Auburn Festival. Chanel B’s voice caught the attention of gospel sensation, Sanders from BET's "Sunday's Best" along with Ashford at the APACHE Cafe in Atlanta, GA. Her performance was groundbreaking and gained her major attention from record labels and production companies.

Chanel B is an artist who has a broad range often recognized for her cover song of Deborah Cox’s “Nobody supposed To Be Here” where she belts out the tune with so much appeal many are captivated as if it were Deborah Cox herself.

Not only is Chanel B skilled in ballads and soul music, she has an up tempo pop sound that many compare to Grammy Award winning legend Beyoncé! Although modest to to the comparison to the Queen B, Chanel B has a humbled spirit. Chanel B, has that STAR Quality that listeners will soon discover and embrace.

Let's get Down to business Debate & Soiree

Own The Mic Music Showcase Featuring The Spotlight Artist "Chanel B."

A night of comedy, soulful live music and more!

BACK TO LIFE BACK TO REALITY FESTIVAL -B2LB2R