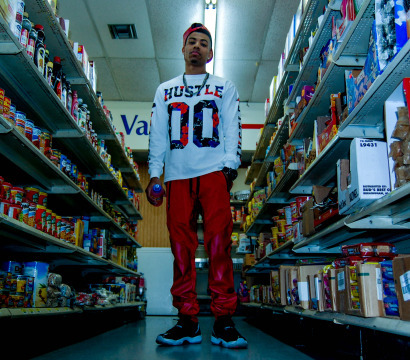 At the age of 8, Chris Flow started to notice his talent with art and music and was aspired to be a rap star! With each opportunity at the mic, young Flow outshined older rappers while entertaining everyone at block parties. Raised by a single mother, who struggled to pay bills and take care of him and his younger brother Kash Kush, music became an outlet, an escape.

Three years later, the family left New Orleans to begin a new life, making their way from ATL to North Carolina. After witnessing his mother fall victim to domestic violence, followed by divorce, Chris stepped into the sole provider/leadership role, the man of the house. He returned to the Crescent City and grinded by any means necessary leading to the release of his 1st mix tape in 2005, which dropped shorty before the devastation of Hurricane Katrina.

Hurricane Katrina marked one of the biggest moments in his life as well as history. Missing the evacuation window, Chris was left behind to levees breaking, people dying in front of him, increasing crime and rising water. The only way out was to walk thru shoulder deep water where dead bodies and debris were floating. Sometimes he would go days without water or anything to eat. Cries for help could be heard in the pitch black heat of the midnight sky. Even under the stress of this traumatic event and the fact that it took days for relief to arrive, he remained positive.

While awaiting the restoration and rebuilding of “home,” Chris moved to California for a minute and returned to New Orleans with a heart of Thanksgiving and a greater appreciation for life. Regaining focus and laying the ground work for the follow up freestyle mix tape "I Ain't Alright I'm Sick" in 2009 – 2010 led to more opportunity which included a stint with Slip N Slide Records opening shows for Trina, Plies, Rick Ross, and Brisco. 2015 Chris Flow is working with big names like Boosie, Dej loaf, French Montana, and Jeremih using his writing talent to produce music with artist and labels. Lil Wayne notice his persistence and hard work coupled with pure talent his hip hop dope unique flow produced the 2015 single "My City" featuring Kidd Kidd formally signed to G-Unit Records under the BNC (Ball N Chill) record label with his brother (Geno).

Currently, Chris Flow is working on new music, on becoming a better man, and living life to the fullest by cultivating this gift. His strength is in the struggle from the streets to the very top.

Chris Flow is working on the second installment from his mixtape I Ain't Alright Im Sick!

The Metropolitan All White Party with Erica Mena

The Howling Wolf with artist Tink

Now Booking Shows, Features, Club Hosting, and other Serious Inquiries Please. This is a contact for Chris Flow's management and NOT Chris Flow personally. While we appreciate all the fan emails, please only reach out for business purposes. Thanks. If You Are a fan follow the social site links at the bottom of the page Chris Flow will appreciate The Love!
Information Request