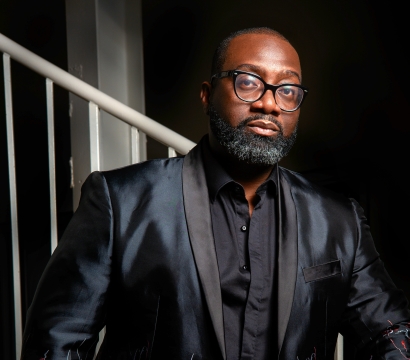 It's rare for the world to experience artistry that is so genuine, so heartfelt...so captivating. Welcome to the world of singer/songwriter, Cleveland P. Jones. He is the true embodiment of soul and jazz. When asked about his future in the music industry, he stated “my mission is longevity, not instant fame. I’ve learned by example and experience not to  rush a good thing."  This native of a little town named "North" in South Carolina, started his artistic voyage at an early age under the tutelage of his mother and grandfather who were the lead singers in church. "My mother truly molded me as a singer by watching her sing in the choir and the songs she's played while we cleaned up at home."

A graduate of two prestigious institutions, Morehouse College in Atlanta, Georgia, and Berklee College of Music in Boston, Massachusetts, Cleveland studied music and theater. From touring with the Morehouse College Glee to playing roles on the stages of Berklee and Spelman College, Cleveland brings a plethora of artistic expressions to the table. While studying at Morehouse, he instantly fell in love with soul and jazz music. "I remember the first time I heard the voice of Little Jimmy Scott...I was sold", he reflects. "It was a voice like mine, and I no longer felt so awkward because of my vocal timbre and vocal expression." During his matriculation at Morehouse, Cleveland discovered many jazz and soul greats like Sarah Vaughn, Ella Fitzgerald, Ray Charles, Donny Hathaway, and Aretha Franklin who deeply influenced his sound and approach to the art of vocal phrasing.

In 2013, Cleveland released his debut album, "Ace of Hearts" and won the SoulTracks.com's New Artist of The Year award.  He also had the honor of opening for soul legend Chaka Khan and was the special guest of The Shadowboxers. His original song, "Don't Leave Me" from his debut album was a major feature in the 2016 Netflix release, "ECHO PARK". In 2017-2018, Cleveland was privileged to tour many cities through out Eastern Europe as a solo artist. Currently, Cleveland is expanding his brand by writing and recording soul, jazz and house music and continues performing nationally and locally. Simply put, Cleveland is committed to deliver unadulterated, timeless music. He is well on his way to higher places, but will always be grounded in his quest to heal souls one song at a time.

New Single: BE RIGHT THERE

Let's Love Make is a collection of heart songs Cleveland has written over time. Coupled with Collaborations from Daniel D. Crawford and Wagner Gracciano and other greats...this album is one to grab!

CDs will be on sale soon!

New Music: WITH YOU by Sy Sez ft. Cleveland Jones

Check it out now on Spotify!

We are so excited that Cleveland will be heading to Chalabre, France!

He is a featured artist for the Serenade of Chalabre Festival and will be working with his Soul Kitchen Family doing workshops and master classes!

Huge thanks to Mr. Chris Rizik of SoulTracks.com for the World Premier of Cleveland's New Music Video.

We are very fortunate that Cleveland will be touring Russia again!

The brilliant Daniel Crawford(Home Africa), produces a masterpiece and Cleveland brings even more life to it!

We are proud of the path that Mr. Jones is taking!

It's been a long time coming and the wait is fiinally over!

Michael Moss of Skylane Pictures directs Cleveland's first ever Music Video! Check it out on the Video Page!

What a way to continue the legacy of building his resume towards legendary status!

Check it out on Netflix!

The Best Damn QUEEN Show EVER!