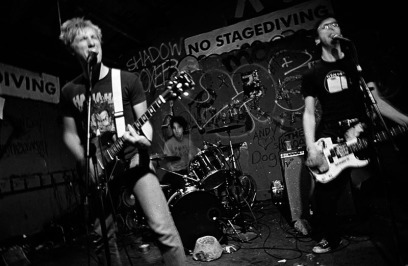 After overcoming an 8 year hiatus filled with legal trouble, drug addiction and mental health issues Clorox Girls' classic lineup is back on tour with their first album being reissued on Burger Records/Wiener Records.

Clorox Girls don't currently have any female members or a compelling interest in bleach, but they do have a knack for writing and playing hooky, high-energy punk-pop that's earned them a rabidly loyal and growing fan following in the United States, Europe, Canada, Mexico and South America.

Clorox Girls were formed in 2003 in Oakland, CA, when guitarist and singer Justin Maurer met drummer Clay Silva while both were both living in a punk rock squat mostly populated by doom-struck crust punks. Tired of the gloomy and abrasive music they were hearing day and night, Justin and Clay decided to form a band that paid homage to their love of poppy old-school punk (they took their name from a tune on Redd Kross' first EP, when they were still known as Red Cross), first-generation rock & roll, and smart '60s pop from England and France. Justin's girlfriend Jennique was recruited to play bass, and Clorox Girls started playing Bay Area clubs. After a short tour up and down the West Coast, Jonny Cat Records released the band's first record, a four-song vinyl 7"; by the time the record hit stores, Jennique was out of the band, and a guy named Morgan stepped in to take over on bass, only to be quickly replaced by Zack Lewis. Clorox Girls also pulled up stakes, making Portland, OR, their new base of operations.

After plenty of frantic touring through the U.S. and Canada, SmartGuy Records released The Clorox Girls' self-titled 2004 debut album, produced by former Fastbacks leader Kurt Bloch; the album quickly sold out its first pressing, and a second press was gone by the time the band finished their next tour. Thurston Moore and Byron Coley famously quipped that Clorox Girls were "Harder to ignore than a trouser full of antlers."

2005 brought a new bass player, Colin Sanders; and the band's second album, This Dimension, and lots more touring, including trips to Europe, Brazil, Argentina, and Mexico; the band also went through some lineup shakeups, with Daniel H. Sayer becoming their new bassist and Richie Cardenas signing on as drummer. In 2006, BYO Records, one of America's longest-lived independent punk labels, approached the band and struck a deal to release their third long-player, J'aime les Filles (recorded and produced by Pat Kearns), in April 2007.

After an 8 month world tour in 2007, Clorox Girls collapsed. Singer Justin Maurer found himself in jail for a number of reasons he refuses to discuss. The band has said that Justin's parole officer is allowing him to tour with Clorox Girls providing he wears an ankle bracelet enabled with a tracking device. After some stints in drug rehab clinics and extensive psychotherapy, Colin Sanders and Clay Silva are back in the band rounding out Clorox Girls classic lineup. In 2015, Burger Records/Wiener Records agreed to re-issue their first LP as well as some demos and rarities. Clorox Girls will tour Westcoast USA in summer 2015.