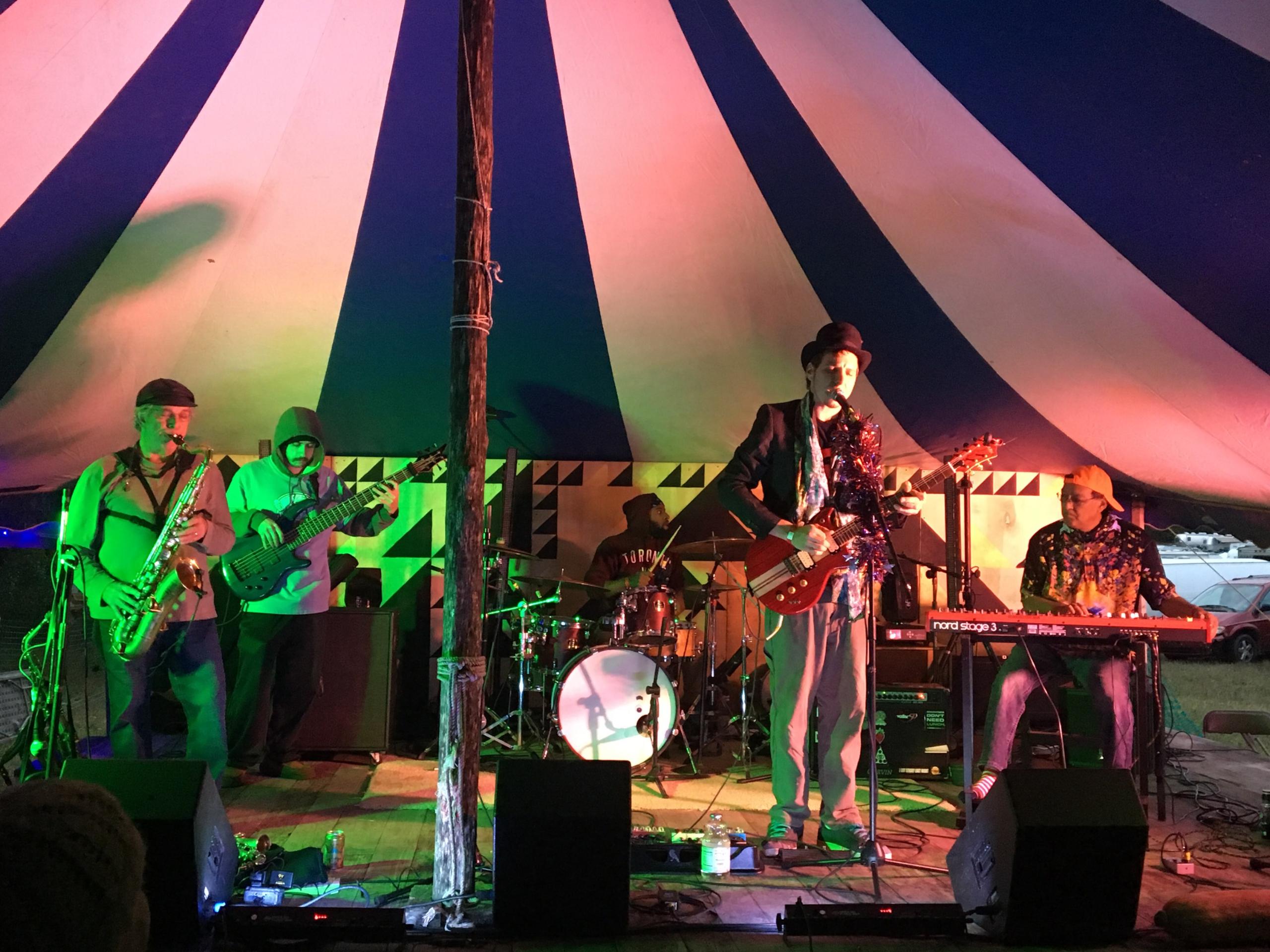 Cosmic Knot is not your ordinary band, more like a band on a mission. To see Cosmic Knot live is to experience something that most won't soon forget. Striving to literally take music to it's furthest physical limits, this band puts every ounce of divine energy possible into every note they play and it shows. Their debut album "Inner Space" hit #7 on the National Relix Jam Band Radio Chart and maintained a top 30 position for an incredible 5 months. Inner Space also hit the top 20 on multiple radio stations around the country and is currently in rotation on radio stations around the world.

Since their beginning in 2015, Cosmic Knot have accomplished a great deal with their music. Being endorsed by Cusack Music, frontman Tom Wall's connection with nature, music and improvisation has been taught about at the University of Michigan. This connection with nature and music, has led him towards learning how to play music with plants. Playing music with plants is achieved with a special device that allows plants to make music. The inclusion of mother nature in music is something that is featured throughout Cosmic Knot's first album Inner Space and will be a staple on the upcoming album as well.

With their music featured on news outlets like Fox, N.P.R., The Detroit News, and M Live, Cosmic Knot have found themselves performing at major festivals, winning awards and recording with people like Muruga Booker (who was Grammy nominated with Jerry Garcia, played Woodstock and is a P Funk all star), Bill Chrysler ( who has sound engineered for John Mayer, The Rolling Stones, Paul McCartney, Grateful Dead...) and many, many more.

There is no band anywhere around here (and maybe anywhere, period!) that is quite like Cosmic Knot! Trust us, these guys must be seen/heard to be believed. Funk/Soul/Rock/Jam/Groove all wrapped in a smooth psychedelic blanket, don't miss it! -The Speak EZ Lounge

I have never been so physically and emotionally overwhelmed by a live musical presence before. You are so much greater than the sum of your members, which are each incredible in their own talent. -G. Duke, Grand Rapids, MI

This is hands down one of the best introductions one can have into the world of world jazz and experimental music. -Kenny Bart, KAMP Radio, AZ

“Inner Space” may be the most surprising regional release of 2017 … if not one of the best. -John Sinkevics, Local Spins

We have been hard at work to bring you some new music along with some new videos.  More details soon!

Cosmic Knot managed to maintain a top 30 position for National Jambands on the Relix Radio Chart for an incredible 5 months.

Cosmic Knot will be performing on Mar. 3rd after winning the Kalamazoo Fretboard Contest.

Coming in at #16 on the Dec. Relix chart, Cosmic Knot have been in the top 30 in the nation for 3 months running!

Cosmic Knot jumped 21 spots on the national Relix chart from #28 in October to #7 in Nov.

Cosmic Knot debut on the national relix chart at #28

Inner Space hits the Relix chart debut at #28 for the October 2017 issue.  https://www.jambands.com/radio-charts/

The debut album by Cosmic Knot hit #1 on the WYCE charts at the end of September.  Their music is currently being played from coast to coast on many different stations throughout the country.

Cosmic Knot host a soft release of the their debut album!

Inner Space set to be Mastered at Capitol Studios

Cosmic Knot will be teaming up with Ian Sefchik of Capitol Studios for mastering of their debut album Inner Space.

Closing out the Festival @ The Wish You Were Here Music Celebration...

Closing out the night during the Halloween Fest @ Bent Arrow Deer Ranch.

Muruga Booker and Tom Wall are joining forces with our Australian friends Jemimah Brett and Charlotte Sagewood of the band Stellar Remnants to create a truly world album.

The Fillmore in Detroit hosts it's 25th annual DMA's.  Tom Wall was up for awards in the world category for work on Mystic World with the Muruga Band.  Muruga managed to bring home 2 of the 3 awards nominated in the World Category.

Tom Wall interview on 88.1 WYCE for the up coming Festival Of The Arts show. Wsg. Amy Andrews  https://grcmc.org/wyce/node/11235/open-mic-amy-andrews-cosmic-knot

Festival of the Arts in Grand Rapids, MI

Cosmic Knot Live @ Festival of the Arts on the outer fringe stage.

A special request memorial performance for the Koavk family.

Cosmic Knot and The Incredible Odds live @ The Tip-Top Deluxe

Tom Wall 88.1 fm WYCE interview with Laura Nowe for the "Wish You Were Here Musical Celebration"

Cosmic Knot @ Cold Creek Campout with special guest all the way from Australia, our good friend from Stellar Remnants-Charlotte Sagewood on bass.

Cosmic Knot with Jesse Ray and The Carolina Catfish live on 88.1 fm WYCE.

Tom Wall sit in with The All American Funk Parade @ Founders Brewing Co.

Cosmic Knot opens for Magic City Hippies at The Stache

Cosmic Knot and Stylee perform along with raffles, speakers and much more!

Festival of The Arts-Outer Fringe Stage

The B.O.B. is located in downtown Grand Rapids directly across from the Van Andel Arena.  20 Monroe Ave NW, Grand Rapids, MI 49503  This is a free show!

Cosmic Knot Hosts The Wish You Were Here Musical Celebration!!!

Cosmic Knot Host's The Wish You Were Here Musical Celebration!!!

Cosmic Knot Hosts The Wish You Were Here Musical Celebration!!!

Come show your support for this awesome event.

The Loving Touch In Ferndale Michigan

This will be the East Side Album Release Party for our debut album.

Come out and jam with us and our friends Melophobix while enjoying the worlds longest beer tasting trail.

The first ever Electric Forest Off Season Gathering.

This is the annual costume party we throw every year.  Come out and grove on the farm.  This will be the first time breaking in the new garage.  11137 S. Dickinson Holton, MI 49425

Award Ceremony: Cosmic Knot is nominated in the Jammie Awards

Cosmic Knot has been nominated for 3 Jammies in the 2018 WYCE Jammie Awards @ The Intersection in Grand Rapids, MI.

This is going to be a Album Release Party for Brandino.  The Set list is:  Brandino, Cosmic Knot, Conrad Shock and the Noise.

After winning the Fretboard Contest we were asked to play the Festival.

Popadosio/Desmond Jones After Party @ The Fishbowl

We are excited to play for the Bluestage Jams.  This is going to be an amazing show.

Our 3 year anniversary at the place it all began!

We're heading north to play on the shore of Lake Superior.  Honestly we're using this trip for a reason to go morel picking as well...

The Un-Birthday Party at the Sherman Bowling Alley in Muskegon, MI

The night will be full of greats throughout the history of Rock And Roll.

U of M Diag.  Ceremony starts at 12pm

Pathway To The Pasture Contest

Our annual costume party that started it all.

Join us as we bid farewell to Centennial Nights.  This place was the home of our first sold out show and they always put ona really amazing production.  Location:  Centennial Hall-Mount Pleasant MI.