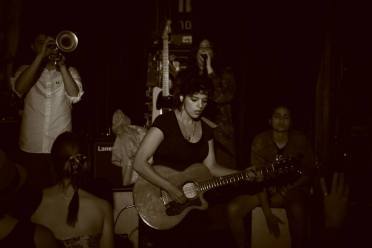 Unexpected London based blues/folk band Cosmo House, began over a chance encounter and a mutual appreciation for blues music. Feadora Morris (Guitar) provides cotton pickin' tactics, searing slide guitar, and an unshakable passion. Partnered with the dynamic vocal range of Dani Sachar (Vocals) that ricochets between the gutsy bellows of Janis Joplin and ethereal notes a choir boy would be proud of. In 2013 they stumbled across Mark Schorah (Trumpet), with his unbounded creativity and penchant for playing so hard he passes out on stage, the band can't quite remember life before him. These guys tend to throw crotchets and quavers out the window and get visceral.

'I was mesmerised it's wonderful'

'Blues inspired sound that is at turns emotive and forceful, direct and intricate, mournful and joyous.'

'possibly the best live band ever'

The band have been busy in the studio this summer and are putting the final touches on their upcoming EP to be released Autumn 2015, watch this space!

Catch it via the following link at 12 mins in and hear what the guys have to say about the band!

The Londonist gives their picks for Oxjam Festival 2014.

Paradise By Way of Kensal Green

Before the Gold Rush