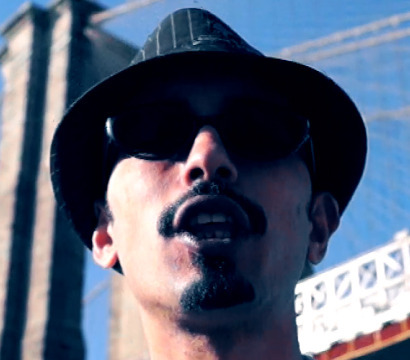 President and co-founder of Golden Goonz Entertainment, Steve Kalikhman, (aka Count Bluntas) is a super producer, enlightened MC, mixing engineer, video editor, creative director, and an information technology consultant. He is down to earth, intelligent, insightful, thoughtful, considerate, project oriented, focused, humble, and might be the 2nd most interesting man in the world.

Count was born in the Ukraine in 1977, and came to the United States in 1980 with his loving parents and older brother. Growing up in Brooklyn, he played sports in the street and the parks with the bigger kids.  Hanging out with the older crowd, Count’s learning curve drastically increased as well as his maturity. As he got older, Count excelled in scholastic activities at James Madison HS where he received national awards and a scholarship. At Binghamton University he created and distributed mixtapes, worked at the local radio station, and received a Bachelor’s Degree in Computer Science.

In 2002, Count worked as a recording engineer at Beat Mechanics Recording Studio in Jamaica, Queens with legendary musician Master Shane (R.I.P). The following year, Count started assembling his home studio while sharpening his production and engineering skills. In the next few years, Count funded his own studio working full-time web development jobs in NYC. He would come home nightly and to build his skills producing and engineering music.

In 2012, Count joined forces with F-DUB and they co-founded Golden Goonz Entertainment, an independent music company based in Sheepshead Bay, Brooklyn. F-DUB has toured the Philippines, released multiple albums, found love, got married, and became a father. Count earned respect from the local music community with his extra crisp studio sound recordings and relentless work ethic. He’s added uniquely talented artists to the Golden Goonz roster including Bianco, Dama Nilz, Frankie Fingaz, Kool Da Great, MavriC, M-Geez, Moey Toons, The SPIX, Eturnal, and Zeps. Count’s recorded and engineered all these artists and produced most of the songs they released under Golden Goonz.

Count’s writing and MC abilities are on display with the release of “Future Paradise” co-starring Frankie Fingaz in 2012, then on “Down For The Count” in the summer of 2013, and finally on “Golden Brothers” co-starring F-DUB in 2014.

In 2014, he added video editing to his resume. Among his credits include 3 full-length music videos: “Believe the Unbelievable”, “Cloud 9”, and “Cant F*** with GnG.”

Striving for excellence, he continues to work overtime to keep Golden Goonz a fixture in the music community by continually creating entertaining content for the masses. Scheduled to be on tour in Corfu the summer of 2014, Count Bluntas is making waves across the Atlantic.

Golden Goonz Entertainment is proud to announce the release of THE SPIX: Episode Two - "Carajo Land." Zeps & Eturnal Suarez smash 16 tracks into dust with powerful punchlines and a rhythematic flow that will have you swimming with the mermaids.

If you like hip hop, boom bap, lyrics, beats, food, oxygen, or Puerto Rican's, then enjoy your stay at "Carajo Land."

The SPIX are making this a free download on BandCamp, so if your broke, this fits your budget.  Also available on SoundCloud.

A collection of dusty boom-bap and hardcore rhymes by 2 Puertorican's from South Brooklyn.

Golden Goonz Entertainment is proud to release the "Black Couch" album starring Dama Nilz. This trap music from the Queen of South Brooklyn will have you bouncing for the whole ride. Eight incredible tracks are available for free download on BandCamp, DatPiff, SoundCloud, and many more.

The amazingly talented and beautiful Dama Nilz blesses productions by 4Dolo to bring you a symphony of trap music that will have you bouncing to every beat.

Guitar: Moey Toons (Get Me There)

Thanks for the support!!! Please share with your friends.

Count Bluntas: "Down For The Count" - Album Release

Golden Goonz Entertainment has officially released the "Down For The Count" album featuring Count Bluntas. Ten hard hitting tracks are available for free download on SoundCloud, BandCamp, ReverbNation, and DatPiff.

See the Official GnG Video for "Believe The Unbelievable" on YouTube.

Contact Information
Please contact Count Bluntas via the form on the right or email your request to goldengoonz@gmail.com.