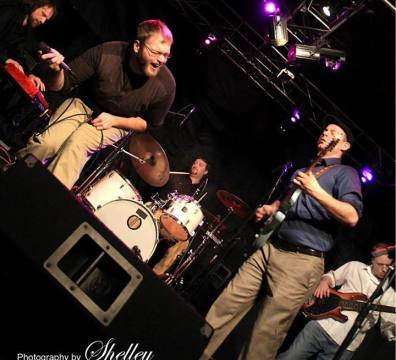 Hailing from the outskirts of the Motor City, Dirty Basement Blues is a band comprised of 5 guys who are as hard working and gritty as the town they represent. The group was initially formed in late 2011 by drummer Mike Conley and guitarist Joe Stanley after teaming up for a studio project to record some of Stanley's new tunes. The two had played together in another project together for nearly ten years, and they were eager to embark on a new musical adventure.

Conley is a rock solid drummer with impeccable timing and a huge pocket. He is the proverbial heartbeat of DBB. Joe Stanley is a lifelong student of the blues. He is the mean guitar slinging, songwriting and arranging force behind the bands sound. Bryan "Bodie" Miller, a longtime mutual friend, was brought in to fill the spot of bassist. With the ability to improvise as well as craft beautifully melodic lines, he was an obvious fit and became the third piece of the puzzle. With the core in place they quickly set out onto the Detroit Blues scene as a 3 piece. In early 2012 they added the young virtuosic Frank Grimaldi on lead vocals. Frank had been playing in a local band since he was barely a teenager and his amazing talent and natural, soulful approach was exactly what the group desired. With the addition of Grimaldi the band began to finely hone their unique blend of blues, rock, funk, and soul into the sound that now defines DBB. In 2012 the band was honored to compete in and win the semi-final round of the Detroit Blues Society "Blues Challenge". With a win under their belt and the support of the DBS the boys pressed on and played several local venues and festivals in 12' and into early 2013. The decision was made to add the greatly talented and seasoned Pete Zajicek on keys in early 2013 after being offered to once again compete in the Blues Challenge. Zajicek is a classically trained powerhouse that grew up playing rock and blues in clubs from New York to Los Angeles. The band once again won the semi-final round, and then in October 13' took first place in the final round of the DBS Blues Challenge.

With their high energy live performances, stellar musical ability, and uniquely crafted original material, Dirty Basement Blues is a true original and a band that is NOT to be missed. In 2013 they plan to record a debut album, compete in the International Blues Competition (IBC) in Memphis, TN, and continue to wow local Detroit audiences.

We're very exctied to be going to MEMPHIS to represent Detroit in the INTERNATIONAL BLUES CHALLENGE!!!

DBB, The lost city band, and the hatchetmen, the blues trifecta show!!!

You can check us out at: