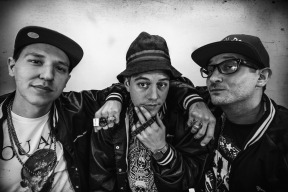 $traight outta FTL aka Fuck The Law City with that BA$$-tanic, thrash rap booty sleaze, it's Death Jam commin' to fuck the world with a peninsula sized DICK of hard bass.  Evil triplets born to a super bad bitch on top of a 48" bazooka subwoofer in the trunk of a Chevy Caprice and raised in the seedy strip clubs of South Florida by a perverted uncle named Luke; Brothers Mister Belvedere, Young Lauderdale and Da Swap Shop Kid are true cult disciples of Ho Hatin' bass.  Certified sub-slayin' angels of def here to put the doom in ya boombox and keep you sinnin' while the records spinnin' with them ass clappin' 808 blast beat explosions from an empire state building of woofer stacks.  It's DEATH JAM 808 or DIE,  the number of the beats, BA$$ and destroy.  Fellas keep killing them quads and ladies keep them PU$$IE$ POPPIN'.

PS - Russel Simmons, you and your cease and desist letters can get fucked.

The other day I was on twitter, and this dude Young Lauderdale sent me his song called "Swisher $weets." Usually, I don't listen to stuff people tweet at me, but for whatever reason I decided to click on the link he sent me, and I became obsessed with it. I've listened to it approximately seven million times, and I want you to listen to it too. Young Lauderdale is a rapper from Florida, as are his compatriots Mister Belvedere and the AutoTune goofball Fewcha Payne. Belvedere and Lauderdale are members of the amazingly-named DEATH JAM POSSE, who claim that Russell Simmons and his cease and desist letters can "get fucked."

Stop-motion nuggets. Kaleidoscopic twerking. Probably not safe for work, or in good taste, especially when you consider the title, "Big Girls." That said, there's something hypnotic to it...

And there's an interesting backstory (no pun intended) via their YouTube page:

A rough cut of Big Girls leaked a few weeks ago and a a young art student named Yabish Fatima from Abu Dhabi, UAE hit us up with a fan vid she made. Apparently Miami Bass is her SHIT! We loved it so much that we sent her the final mix and artwork and decided to make it the official video!

" THIS $ONG IS FUCKING AWE$OME AND MADE ME WANNA $HAKE MY FAT A$$ AND $ING ALONG ..that AND it embodied the spirit of women's struggle for power." -Yabi$h

South Florida’s Death Jam like ladies with an ‘extra pounds’ figure – or as they put it: Big Girls (They So Fly). Cue an appropriately fat slab of old school Miami bass somewhere between Run DMC’s Its Tricky and Poison Clan’s Shake What. Expect ridiculous bass drops, tinny-as-fuck synth snares, shouty rhymes in praise of big booty and a hook lifted from The Four Season’s Big Girls Don’t Cry. Miami bass is not for the faint-hearted, as anyone who’s ever heard 2 Live Crew will know. Not sure how hardcore feminists will deal with this eulogy to the more generous female body shape – sample lyric, “…don’t you quit/ That ass so big it’s breakin my dick.” I’d skip the video unless you’ve got a strong stomach too. Only in Serge Storms’ state. Cop it free below…

Fan Vid from the UAE!

A rough cut of Big Girls leaked a few weeks ago and a a young art student  named Yabish Fatima from Abu Dhabi, UAE  hit us up with a fan vid she made. Apparently Miami Bass is her SHIT! We loved it so much that we sent her the final mix and the artwork and decided to make it the official video!

” THIS $ONG IS FUCKING AWE$OME AND MADE ME WANNA $HAKE MY FAT A$$ AND $ING ALONG ..that AND it embodied the spirit of women’s struggle for power.” -Yabish Fatima

The up and coming South Florida group known as Death Jam return to the interwebs today with a dope new track and video for our listening and viewing pleasures. The track is called “P.P.P.” and finds the group getting busy over some production by the beast known as Red Velvet.

“P.P.P.” is a throw back to the classic booty music that invaded hip hop, especially South Florida in the early days of hip hop. It pays homage to acts like 2 Live Crew, Poison Clan, Splack Pack, Jam Pony Express, and all the other Miami Bass legends. Check out the clip after the jump and ride out.

"This song could easily replace the Star Spangled Banner as the new national anthem."-SYFFAL

If you listened to rap back in the day, especially if you also had a turd box Toyota Corolla with a stereo that cost double what the car was worth... chances are you have gone through a Miami Bass phase. I never had a sub in any of my cars but I still owned a DJ Magic Mike CD to bump in my friends cars. One of the first rap records I ever listened to was 2 Live Crew (with the volume on 1 and my ear pressed to the speaker so no adults/parents could hear it). Following in the great tradition of booty bass anthems is Death Jam.

This track P.P.P (pussy Poppin' Posse) is the soundtrack to doing meth and eating homeless dudes faces. The first time I heard this shit I instantly pulled money out of my pocket and made it rain all over the house. Oh I popped my pussy bro. I popped it fully and completely.