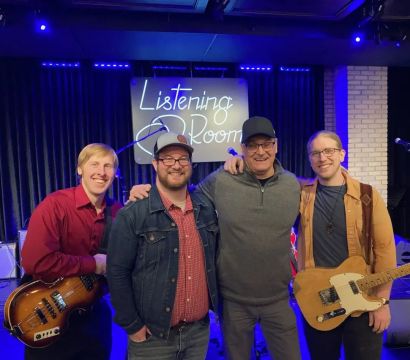 Formed in 2016, Deerfield Run blends blues rock with a touch of country and a dash of funk, serving up a tasty musical blend that’s irresistible to audiences. Hailing from Grand Rapids, MI, the band delivers strong original songs and surprising covers pulled from a deep back pocket of classic tunes. As a group of seasoned West Michigan musicians with influences ranging from Al Green to Eric Clapton to the Eagles, their powerful instrumental and vocal performances captivate audiences of all ages. Their debut, self-titled album was released in September 2017, and the group released their new album, Reckless, in September 2020. Keep an eye out for Deerfield Run as they groove on through West Michigan and beyond!

Deerfield Run is (from left to right):

Hi folks!  Our new album, Reckless is now available for streaming or downloading online!  Made of 10 new original songs, we've been working on these tunes for a long time, and are excited to share them with you!  You can check it out on Spotify, iTunes, Apple Music, Pandora, Deezer, Google Play, and wherever else you can stream or download music!

We're excited to announce our first U.P. Tour in August!  We currently have 3 shows lined up (and will hopefully be adding another), and the dates are:

Summer is heating up! Let's get down

After a fairly slow winter and spring, we are swinging into gear for the summer.  We like to have fun, and we like to keep the music going so you can enjoy yourself and keep grooving too.  You can catch us at any number of venues throughout West Michigan over the next few months.

Be sure to check out our show schedule and check back often for any updates.

We look forward to seeing you on the dancefloor soon!

Whoo it's been a busy summer folks.  All of our adventures are finally settling down, practices are happening again, and live shows are the name of the game for the next few months.  We've got a few new shows lined up for the fall, so make sure to check out our show calendar for the latest dates!

Deerfield Run will be playing with West Michigan's finest bands in the premiere anual celebration of Robert Allan Zimmerman's (better known as Bob Dylan) music on May 21, 2017.  We are so excited to be a part of this event at Founders Brewing Co and look forward to seeing you all there!

The CD is on its way!

An update on our forthcoming album:  It's done!  Featuring Mr. Ben Zito behind the mixing console and mastering from Ian Gorman, we can safely say it sounds good.  Reeeeal good. You'll enjoy it - we promise!

We're working on getting them all boxed up and looking pretty for you, and then they'll be in your hands and in your ears.  Stay tuned!

Deerfield Debut album is in the works!

Good news Deerfans!  We have officially booked our studio time for our first studio album in December.  Expect to see some tracks popping up on our Facebook and Soundcloud pages around the holidays.

We won't be playing too many gigs during that time, but you can check us out at the Wayland Hotel on Christmas Eve - Eve with Big Dudee Roo and Seth Bernard at West Michigan's best annual pre-holiday party.

Deerfield Run and Between the Pines at Mulligan's Pub in Grand Rapids, MI

Between the Pines' debut show!  And it's free!  Come on out!

All Deerfield, all night at Grand Armory Brewing Company.  Grab a beer and some dinner after an afternoon on Lake Michigan.  We'll be there too.

Almost a year to the day from Deerfield Run's Muskegon debut, we're headed back to take the stage at Unruly Brewing Company.  Join us--we promise there are some new songs.

No cover, $3 Michigan draft beers, and local music guru John Sinkevics will even be there!  Don't miss it!

We're proud to be a part of the inaugural Willowsong Music Festival.  Great music, good eats, and a spot to camp all on a beautiful farmstead in Sidney, MI.  Count us in.  Count you in too?

Founders' Taproom with Nicholas James and the Bandwagon

We're excited to join Nicholas James and the Bandwagon at Founders Brewing Company!  Come out and join us for a night of great music and delicious beer!

Join us up in Traverse City at the Workshop Brewing Company for a night up north on the lake filled with food, tunes, and brews.  We'll be happy to have you along!

We're stoked to be playing Lansing Brewing Company!  Come and hang out with us for our first show in Lansing!

We can't wait to be return to the Tri-Cities, and are excited to make our first appearance at Bemo's Bar in great Bay City!  We'll be joined by our friends, The Barbarossa Brothers, so come out and enjoy an awesome evening of music!!

Night one of two nights out in Hopkins at Hilliard's Corner Lounge.  We're can't wait to seeing some familiar faces out on the dancefloor!

Night two of two nights out in Hopkins at Hilliard's Corner Lounge. We're can't wait to seeing some familiar faces out on the dancefloor!

We're really looking forward to this one.  Spend some time in the park listening to some good music at the East Grand Rapids Concert Series!  It's a great way to spend your Monday night. See you there!

Deerfield Run will be supporting Lil' Ed and the Blues Imperials as part of the WLAV Summertime Concert Series at 6:30 PM.  Even if you're not a Deerfield Run fan, you should definitely check out Lil' Ed at 7:30 PM.  Seriously.  He's awesome.

The show is at the DeltaPlex Arena at 500 Turner Ave NW in Grand Rapids, MI.  Gates open at six.  See you there!

This show is totally free and a totally good time.  Swing by, enjoy the community, and snag a bite to eat while you're at it!  The Celadon Summer Concert Series takes place at the bandshell at 2050 Celadon Dr. NE in Grand Rapids, MI 49525.

Head down to Grand Rapids Harley Davidson in Hudsonville, MI for a night of live music, games, $2 beers and a $1000 gift card giveaway!

Get on that hawg and head on over!

We're excited to return to the Pyramid Scheme on Thursday, 7/18, and are even more excited to be joining 2 great bands for this evening of awesome music!  Paradise Outlaw and the Kari Lynch Band are both fantastic Americana bands, and we can't wait to share the stage with them!  Tickets to the show are only $10 ($12 day of show), and we have them on-hand.  Feel free to drop us a message and we'll hook you up with as many as you'd like!!

We can't wait to return to the Celadon outdoor amphitheater for another free, all-ages show on 8/1!  Music goes from 6:30-9:30pm!

Deerfield Run blends blues rock with a touch of country and a dash of funk, serving up a tasty musical blend that’s irresistible to audiences.

The Grand Rapids, MI band focuses on delivering strong original songs and surprising covers pulled from a deep back pocket of classic tunes. As a group of seasoned West Michigan musicians with influences ranging from Al Green to Ryan Adams, their powerful instrumental and vocal performances captivate both young and more experienced audiences.

Look out for Deerfield Run as they groove on through Grand Rapids and West Michigan. CDs and merchandise are available at almost all live performances. The self-titled debut album is also available on Spotify, Amazon Music, iTunes, and at local record stores around the Grand Rapids area.

Deerfield Run
Saturday, January 11th
$5 Cover/ Doors at 8pm
Show at 9:30pm
(21+)
Billy's Lounge
Deerfield Run blends blues rock with a touch of country and a dash of funk, serving up a tasty musical blend that’s irresistible to audiences. The Grand Rapids, MI band focuses on delivering strong original songs and surprising covers pulled from a deep back pocket of classic tunes. Their powerful instrumental and vocal performances captivate both young and more experienced audiences. Look out for Deerfield Run as they begin to play more through Grand Rapids and West Michigan, with an album coming in 2020.

Contact Information
Interested in getting in touch with Deerfield Run? Use the contact form at the right to get in touch with us or email us at deerfieldrunband@gmail.com. We'll get right back to you.

Thanks for listening!
Information Request