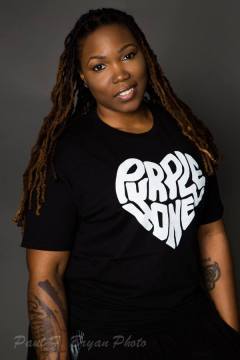 CEO and DJ extraordinaire, Lady Mysterious, was born and raised in the heart of Baltimore, Maryland. With a dream to play music for the world to hear, she began her preparation as a DJ at the tender age of 13, through these years she was groomed to face the challenges of this “male-dominated” industry.

For more than 15 years, Lady Mysterious has proven that nothing will stop her from mastering her craft and spreading her music across the globe. Having had the privilege of entertaining at every major nightclub within the Baltimore-Washington metropolitan area and abroad, her unique sound has been featured at many celebrity infused events. Mysterious has been afforded the opportunity to work with a few of the industry’s top celebrities such as Ariane Davis (Love and Hip-Hop Atlanta), Legendary Beatboxer, and Rapper Biz Markie, International Billboard Recording Artist Teyana Taylor, Mumu Fresh, Teddy Reily, Rick Ross, and many more. Lady Mysterious credits her majestic flow to her early upbringings listening to world-renowned DJs such as DJ Cocoa Chanelle, Spinderella, and Jazzy Joyce however, it was the legends from her hometown which lead her to create her own style of blending music to become “The Party Assassin”. Lady Mysterious has shared the stage with some of the biggest DJs, promoters, and celebrities from all over the world.

In July 2011, she was the runner up for the Diva of the Mix contest sponsored by 92Q (Radio-One, Baltimore Station). Since then, she has mixed on several radio stations across the East Coast. She was crowned “Dj of the Year” for 2015 and has also been featured in Slantress Magazine, a magazine that focuses on the empowerment of black women. She was recognized and awarded by WOP (Women of Power) for her outstanding achievement as an African- American female entrepreneur in the city of Baltimore.

As CEO of Lady Mysterious Entertainment, her role is to provide an entertainment platform where DJ’s can work together as a team to give party-goers the “Ultimate” party experience. Lady Mysterious is not only a successful entrepreneur, but an avid community activist. She has entertained for various community events geared toward social equality and civil freedom for all. Most recently, she has been the featured DJ for block parties to aide against the fight for youth homelessness in the city of Baltimore and successfully completed over 30 weddings in one year!

Her passion has led her to participate in rallies and marches led by Baltimore city government officials and leaders as well as M4RM (Model for A Role Model), Aziza Pe&ce Youth Program, and Heal A Woman…Heal A Nation. For black music month, Lady Mysterious was honored for her dedication as a humanitarian and music guru by receiving the 2016 "Arist Achievement Award" in her hometown. Lady Mysterious is setting goals and achieving greatness and hopes to pass her legacy onto anyone that strives to step above and break the ceiling of mediocrity. She is an example that regardless of race, gender, and creed, if you remain focus, NOTHING can postpone your DREAMS.

The Platform Honoring Lady Mysterious with the 2016 Artist Achievement Award !!

Due to the Covid Pandemic, events are limited but your request to book is still WELCOMED!!!