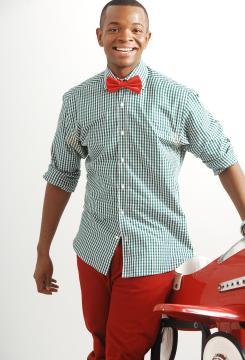 An emerging Host and Emcee, Doice John brings six years of in the field experience. Doice began his hosting journey in Detroit, Michigan.
Doice studied communications and anthropology at Wayne State University. Doice continues to use the skills attained in college to tell the stories of whomever he is interviewing and show them in the best light.

Doice has also worked as an Emcee and Host for top car companies such as Jaguar, Scion, Cadillac, Fiat and Chevrolet. He employs a dynamic and fun approach to keep audiences entertained while teaching them about automotive basics and new things in the industry.

Doice recently hosted the “Hotter Than July” film festival in Michigan.Hosting the HTJ film festival was an awesome experience, Doice got to interview international award winning poet Natasha T-Miller . Doice recently hosted the Chelsea Film Festival. It was a great experience because the theme of the festival was “Making the world a better place” ,something he is passionate about . In addition to the film festival, Doice recently conducted on camera interviews for "The Shepherds Vineyard", which is a charity ballet raised money For St.Jude's Cancer Center For Children.