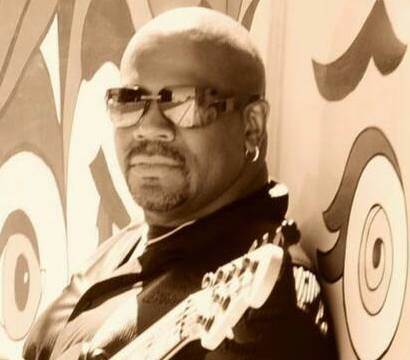 Bass soloist, E.Pruitt is a Native of Kansas City, Graduate of the Charlie Parker School for the Performing Arts and A winner of a number of Bass Awards, "E" has toured the US, Europe and Asia. Sharing the stage with artists and groups such as Brian Bromberg, Michael Manring, Michael Powers Group, Norm Stockton, The Josh Williamson Band, Doug Johns, Jeff Scheetz, Brian Beller, The Scorpions, Tony Macalpine, Paul Stanley, Rev John P Bailey, B.B King, Brett Michaels, Miles Davis tribute Group "Miles & Miles" and Greg Howe. He was one of few bassists contacted by Vernon Reid to fill the open bass position for the band "Living Colour".

The E.Pruitt Band debuted at the 2009 Bass Odyssey, performing along side artists such as Michael Manring, Doug Johns and Lawrence Hightower. The band blends R&B, Funk, Jazz and Neo-Soul with a twist. 2 Bassists. The band current line up consists of Ivan Payne: Drums, Walter Finch: Guitars, John Cole: Bass, Reshard Radford: Keys and E.Pruitt: Lead Bass. The band performed at the 2011 Bass Odyssey with Brian Bromberg, Brian Beller and Norm Stockton with outstanding performances throughout the state of Washington. The EPB is Pure Soul.

E.Pruitt has hired by Ashdown Engineering and KORG USA to be their new Bass Product Specialist. He will begin traveling throught the US and Canada cunducting Bass Clinics and Dealer Trainings. Watch for him a a store or venue near you..

E. Pruitt Band is an instrumental, funk/R&B band with a unique sound. The band, which is based in Sumner, consists of E. Pruitt on bass, John Anthony on bass, Jacob Nordgren on guitar, Ivan Payne on drums and Reshard Radford on keyboards.

They all got together last year to play an event called Bass Odyssey. Shortly after that Pruitt got offers for the band to play Taste of Tacoma and Bite of Seattle and what was a project turned into a full band.

Pruitt moved to this area six years ago. He played in a few top 40 cover bands. He met Payne through a friend who plays bass. He met Radford, who used to be in jazz musician Darren Motamedy's group, from hitting shows in local clubs. Anthony and Payne played in a band together.

The group plays a few cover tunes. One is "Feels So Good." Jazz musician Chuck Mangione wrote the song, which was a hit in 1977. Their focus is on original material.

"Every practice we add to the set list," Pruitt said.

Anthony said on the songs one of the bass players focused on a funk line while the other plays a lead bass line. This provides a rare and unique opportunity.

"It is a chance for us to explore," he remarked. "I am learning at the same time I am playing. "It gives me a lot of freedom," Nordgren said. "I have a lot of room to add some flavor. It works really well." He said if Pruitt is playing a lead bass line he changes the phrasing of his guitar playing "so as not to clash with what he is doing."

Pruitt has written the majority of their material. Nordgren and Radford recently wrote a song together.

"Everyone has input in practice," Pruitt said. "Everybody in this band has their voice."

"It is like a good home-cooked meal," Payne said.

"Everyone just finds their place and it fits," Nordgren said.

They have played a few shows at the Stonegate and the Swiss. They have been in discussions with agents and managers about lining up more shows. "We have the type of energy that makes people want to get up and move," Pruitt said of their performances. "If you see us, you will want to see us again."

They recently began recording an album. Pruitt is optimistic about the album. "What we do is melodic and groove oriented," he said. "That sells records."

E.Pruitt Band and other Wa based bands performe