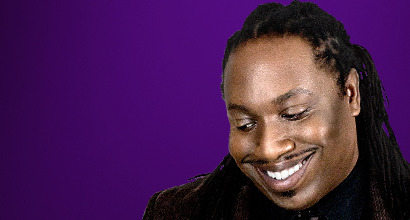 Please go to http://www.edmabrey.com
or
http://www.mylifeisahashtag.com
Ed Mabrey is the current Individual World Poetry Slam Champion, having won the title twice in his poetry career (2007 and 2012).  He was the first person of color to win the title and continues to be a trailblazer, consistently raising the bar and setting new and ambitious standards for this performance art form.
Ed can be seen on Season 3 of Verses and Flow, brought to you by Lexus, it airs on TV ONE. Ed also is a featured performer on All Def Digital, brought to you by HBO Online.
Some of his other achievements are:  2012 Poetry Slam Artist of the Year (National Poetry Awards),  Emmy nominated actor, National Best Selling poetry anthology contributor (“Spoken Word Revolution Redux/Sourcebooks”). He has served as Host/Master of Ceremony for over 200 events in the past 4 years and over 600 events in the past 8 years.   During the course of his career, he has toured internationally and has conducted performances and workshops at over 70 colleges and universities.
An accomplished poet, spoken word artist, writer, life coach, motivational speaker, comedian and actor, Ed Mabrey is driven by an incredible passion for creating experiences with every performance. His performances are often noted for their unique blend of passion, grace, creativity and fire. Ed has created characters that are unforgettable and experiences that prove to be life changing.
Ed Mabrey is the founder of Black Pearl Productions LLC.  Black Pearl Poetry, an offspring of Black Pearl Productions, LLC, one of the most successful poetry shows in the nation, has hosted and produced over 1,000 poetry events and concerts, including shows featuring The Roots, Umar Bin Hasan, The Last Poets, Gil Scott-Heron, Ursula Rucker, and Saul Williams, to name a few.
Utilizing his diversity of artistic skills, Ed has curated for the Martin Luther King Jr. Performing Arts Center, been featured in the Whitney Museum (NY, NY), was founder of the first CUPSI/ Poetry organization for Arizona State University, mentored the first ever Brave New Voices Youth Poetry Slam team to come out of Phoenix, Arizona and Charlotte, North Carolina.
As an actor, Ed Mabrey has appeared in Oscar Nominated feature films, was a member of an Emmy nominated cast for a Movie-of-the-week on Fox and ABC, has worked with Kuumba Theater and Red Herring Theater.
Ed earned the honor of being a recipient of "Poet of the Year" by the Ohio Poetry Association in 2007.  Ed is a Rust Belt Regional Poetry Slam Champion, Lake Eden Arts Festival champion, Great Plains Poetry Slam champion and continues to perform competitively in poetry slam.
In his most recent career addition, Ed Mabrey has added comedy to his artistic endeavors. Since pursuing comedy in January of 2013, he has hosted and opened at several of the Comedy Zone locations in North and South Carolina. His more than 25 comedic appearances include opening for such notable comedians as Ian Bagg, DL Hughley and Charlie Murphy.

While currently residing in Charlotte, NC, Ed is currently touring nationally performing poetry and conducting workshops as a solo artist.

"... He's a horn in the wilderness of the poetry scene, whose professional attitude and unique talent have placed him in the tradition of artists like Umar Bin Hasan and Patricia Smith, who enhance the humble art of delivering human being (in all its definitions) through microphones...A life-changer, a satirist, a theatre craftsman, a page/stage orchestrator, a reverberation, and a heart like an orange... " -Dave Nichols

"Mabrey's vast gift is instantly apparent to the listener. His writing is rain forest thick, while his voice brings to mind a tenor like tonality. He bleeds ink."
-Taalam Acey

"When I first heard Ed Mabrey, I called him The Voice of God, like everyone else; it wasn't until his words had sunk in, however, that I realized he had been touched by Her as well."
- Taylor Mali

"Ed Mabrey compels me to reenlist in Gentleman Practice 101 every single time I'm    in his presence. His words come from giant wells of breathtakers and bomb water, good graces and paradigm wrecking balls. His edge is near invisible, the kind that cuts right through the bullshit and down to the heart strings before you know you've even bled."
-Buddy Wakefield

"If one is lucky enough to come across Mr. Mabrey’s work, you may find yourself luckier still, to find the experience of having a poet possessed by some of the shake of them great holy ghosts that sometimes shake us all, and for that poet possessed to move your body like he was possessing yours--like a spirit haunting a house, curling himself around your spine and not letting go until both of you are too tired to move, and like an exorcism in reverse, you may walk out that house haunting a little shook, a little scared and a little more appreciative of the skin you still wear. There is intensity in this man, and an intense splendor to be had from the work he shares."
-Anis Mojgani

.*Congratulations to Ed for taking 8th place in the 2011 Individual World Poetry Slam! That's his fourth top ten finish, including taking 2nd place and being the Champion from Feb 2007-Dec 2008!*

Go to http://www.edmabrey.com for all shows

Contact Information
Ed Mabrey is an accomplished poet, writer, life coach, motivational speaker, and actor who is driven by an incredible passion for creating experiences with every performance. His performances are often noted for their unique blend of passion, grace, and fire. Ed has created characters that are unforgettable. Ed Mabrey has appeared in feature films, Movies-of-the-week on Fox and ABC, and on stage with Kumba Theater, Red Herring Theater, and countless National Poetry Slams. He has been part of an Emmy nominated cast, was recipient of "Poet of the Year" by the Ohio Poetry Association, and was the first person of color to win the Individual World Poetry Slam Ed is currently represented by Black Pearl Productions LLC.
Information Request