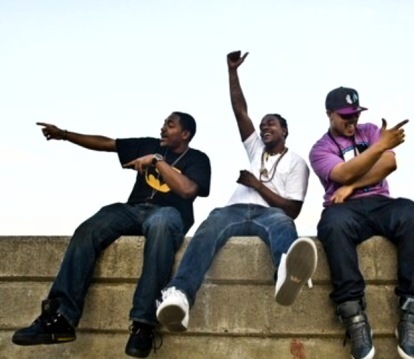 The FlyRydaz are a Hip-Hop/Pop/Electro group who are steadily carving their way into the music industry. The group grew up together in historic Cambridge MA, blocks away from world renowned Harvard and MIT, next to Boston. Its members, Rook, 23, Woodz, 24, and React, 22, are a tight-knit team who not only make phenomenal music, but also put a unique spin on traditional styles. ==================== Rook was raised in a musically-eclectic home, and wanted to express himself from an early age. He begged to start working as an actor and model at age five, and gained experience and skills working with top producers. At age 12 he had worked his way up to a national hit kids' TV series, PBS's daily show, "Zoom!" He enjoyed a national reputation as a TV personality for several years. In 2001 Rook started a rap group with Woodz and friends, and they began recording. In 2004, Rook moved to New York City for college, music and experience. In the City, he found his way quickly, competing in rap battles in venues all over, and making friends in the industry. He is busy traveling the East Coast performing and recording every week. React also grew up in Cambridge MA, where music and basketball were his loves. He would play ball with his brothers and friends, and then hang out in the parks in long freestyle sessions. In school, React formed a rap group, SRS, with two of his classmates, including the now-successful rapper Sam Adams. They are still great friends. By high school, his brother, Woodz, had formed his own rap group with Rook and friends, and pulled React in with them. The group earned cred around Boston for putting down cool raps in appearances at big parties and social events. In 2005, React attended the University of Massachusetts Dartmouth, where he was a basketball star all four years, earning awards and accolades for his performances on and off the court. All the while he was writing rap lyrics to let people know music was still on his mind. After graduating in 2009, React began working seriously with his brother Woodz and Rook. By then the two had formed the "FlyRydaz" super-group and were eager to add React. Woodz has been immersed in music since a child. Growing up in a vibrant family setting in Cambridge, he was exposed to all kinds of music. As a tyke, Woodz would recite his favorite MC's rhymes on his way home from school, and showed an early talent with hip-hop. In high school he teamed up with childhood chum Rook and friends, and began working more seriously on writing. After a year or two of recording, Woodz found a unique style. His ability to write a well- rounded and vocally sound chorus is unmatched. In early manhood, Woodz fathered a beautiful baby girl, which focused his work even more powerfully, and brought out a determination for success that is stronger than ever. ================= The FlyRydaz' continuously growing fan base, fans from high school to mid 20's, love loud beats and partying; and the 'Rydaz never disappoint them. They bring a dynamic and innovative approach to music that makes them stand out and thrill an eager audience. The FlyRydaz have performed all over the Northeast, including Boston, Providence, Philly, DC, New Hampshire, and New York, amazing crowds and creating memories. In mid-July 2010, they captured and controlled a crowd of 2500 at a sold-out Boston House of Blues, supporting their friend rapper Sam Adams. Then they joined Sam's tour two months later for 6 dates. They've also shared the stage with such acts as BadBoy artists MACHINE GUN KELLY and LOS. CLINTON SPARKS, MAC MILLER, VH1'S SOMAYA REESE, KIDINK, STALLEY, RADICAL SOMETHING, AKROBATIK, MOUFY, and more. They were also selected to perform at fundraiser events including a performance for the 'Make a Wish Foundation' in Lowell MA, as well as a performance for the US military event 'Our Forgotten Warriors' at Joint Base Lewis McChord in Tacoma Washington (with Somaya Reece). Recently, they won an ESPN music contest and are having our music featured during their Friday Night Fights Boxing event. Their music has also made is second appearance on the the Boston airwaves, with their song being spun numerous times on the famous HOT97 Boston. Woodz recently came in 3rd place in Oscar Award Winning and Three Six Mafia member Juicy J's nation wide song/video competition, beating out thousands of entries. He won a skype listening and feedback/advice video session with the decorate rap legend and the video was on Juicy's website for weeks. Woodz' vocals were also used on a French electro album by artist Paral-lal. Rook, who also has an apartment in NYC, which subsequently services as the groups base for all NYC related biz, is about to release his 2nd much anticipated project 'Mixed Ape: the mixtape' this march. Woodz is also in gear to release his first solo project 'My Life is ahhh Party' soon, and React is also set to drop his solo joint entitled 'The Play'.

So these days you can catch them in the studio, on the road and in your ear.

After a month of fierce competition, Boston’s FlyRydaz have emerged as the victor of the March round in the ESPN “Main Event” Competition with their song, “Mama Told Me.”

As part of their victory, the trio will have their winning song played on ESPN during Friday Night Fights. Also, the group can now count themselves amongst the four artists who will battle to be crowned “Main Event” champ, with a final vote taking place in August to decide which song will be featured on FNF‘s “Images of the Year.”

FlyRydaz set to drop their much anticipated mixtape.

FlyRydaz drop "Out of this world: FlyRydaz vs. Black Eyed Peas" mixed by DJ Stix

FlyRydaz will be headlining an all ages show at the middle east upstairs on nov 8th at 7pm. BE THERE!!

The FLYRYDAZ release their latest project MASSIVE MUSIC. The tape will be featured on blogs across the country as well as in the UK. Free downloads are availabe here as well as FlyRydaz.com

The group plans to release their next, highly anticipated mixtape "MASSIVE MUSIC" this August. It will be released thru various websites and blogs.

The FlyRydaz released their 2nd mixtape "Big Beats & Fly Shit" on New Years Eve to critical acclaim. This mixtape is powerfull, energetic and clearly shows progression. It was released on multiple blogs and their website simultaneously.

You can download the mixtape here for FREE: http://bit.ly/FlyRydazMixtape

3 days before Christmas the FlyRydaz performed as openers at a sold out Mac Miller show in Cambridge, MA @ The Middle East...AND ROCKED!!!

FlyRydaz have been added to yet another Sam Adams tour this winter. Tagging along for 5 dates, 6 shows, Nov 26-30.

The FlyRydaz just added to sold out show with Sam Adams

The FlyRydaz were just added to sold out show with Sam Adams at one of Long Islands hottest clubs "The Crazy Donkey".

FLYRYDAZ on Bostons HOT 97 Every Sunday!

You can catch the FlyRydaz music each and every sunday night from 7-10pm on Boston's HOT97 during DJ STIX and DJ HECTIC's hit radio show. DJ STIX also hosted their hit mixtape "Female Fetish" which is available for free download online.

Rook's solo mixtape has been released.

On July 16th Rook released his debut CD entitled "The Boy Who Could Fly: The Mixtape". After only a few days the CD was downloaded hundreds of times and has received praise across the internet.

Cups in the Air music video on the way!

This past July fourth weekend The FlyRydaz shot a video for their hit song "Cups in the Air" feat. SebNyce. Release date to be announced soon!

Capitalizing on their recent success, The FlyRydaz will be releasing a HUGE party mixtape for the back to school college scene. This will be a big project and will surly solidify their career in the music industry.
Back

Western Front Opening up for Omillio Sparks of State Property

Headlining show at the middle east in cambridge MA. doors at 7pm ALL AGES!!