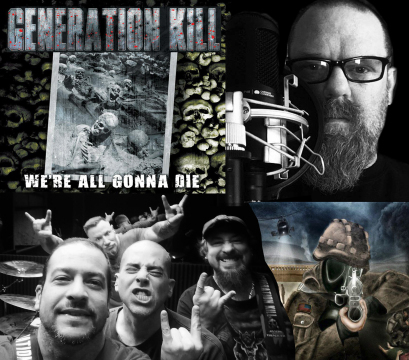 This is not just another Thrash Band. Generation Kill incorporates many different styles of music, which sets this band apart from the rest. All five members have diverse musical backgrounds, which define and allow GENERATION KILL to be a band with no limitations. Their highly acclaimed on Season of Mist released debut album "Red, White and Blood" incorporated already everything any aficionado of the genre might have wished to hear for the last decade: crunchy riffing, capturing melodies, killer solos and exactly the right dose of unashamed aggression that propelled bands like METALLICA, ANTHRAX, MEGADETH, TESTAMENT and many others to the forefront of extreme Metal music in the 80's. Yet GENERATION KILL do neither serve a dusty trip into nostalgia, nor is this a bunch of kids desperately trying to recreate what they never experienced.

This should come as no surprise as GENERATION KILL was formed by former EXODUS frontman Rob Dukes who draws deeply from his musical roots that show through openly. Lead Guitarist Jason Trenczer (ex-Mutilation) is a master of technical guitar work adding catchy riffs and solos. Guitarist Jason Velez contributes an Erie metal style with groove and melody. Newest editions to the band are Powerhouse Drummer Rob Youells, who adds an extra dose of speed and power with his hardcore/thrash background, and Max Velez, bassist for Undivided has joined his brother to round out the group.

After their first release “Red, White and Blood” on Season Of Mist GENERATION KILL have released their second album (We're all gonna die) with Nuclear Blast records. Produced by Zeuss, who is well known for his work with Agnostic Front, Chimaira, Hatebreed, Shadows Fall and Rob Zombie amongst others. They approached the new record as a challenge by trying not to do the same thing as on the first record but at the same time still keeping their identity of who they are – a group of guys that grew up on metal, punk and Pink Floyd – outside the norm.

Generation Kill's Second album (We're all gonna die) has graced the #2 position on the CMJ Loud Rock radio charts. The track "Born to Serve" has ranke in at #37 on the music choice metal charts. It was voted #2 in the top metal albums of 2013 in Steppin' out magazine, right under Black Sabbath. It's single "Prophets of War" also held on Liquid Metal's Devils Dozen for 8 months solid as well as #12 in Revolver magazines most played album of 2014.

Generation Kill is currently working on their 3rd album due in 2019.

Pleased to announce the addition of MAX VELEZ as our new bass player.

Songs are coming together and having Gary Holt guest on a song will hopefully excite the Exodus base.

Wait until you hear this thing!

Thanks as always for your support!

http://www.943theshark.com/ The FM debut of DMC's single with Generation Kill. Fired up coming out on itunes May 31st. This will be the single from Daryl McDaniels' solo album that will include collaborations with members of Motley Crue, Sublime, Public Enemy, Blink 182, Green Day and many more.

Rock n roll hall of famer Daryl DMC McDaniels and Generation kill release the first single for their collaboration. Entitled Lot Lizard it is produced beautifully by Ron Bumblefoot Thal who also plays on it.

Generation kill team up with DMC and Bumblefoot

Generation Kill, which features former Exodus frontman Rob Dukes, crossed paths with DMC on the road and gave him the latest Generation Kill CD, We're All Gonna Die', and the rest is history. Darryl contacted the band immediately after listening to the album, and asked if they would collaborate on a song, which very quickly turned into recording a full length album. When thoughts of a producer were being thrown around, Ron ''Bumblefoot'' Thal, was someone who was in the bands sights, and as of January 2nd of 2015, Ron has been working with the band.

2013-08-21 - Nuclear Blast is proud to announce the signing of New York City-based thrashers GENERATION KILL, headed by EXODUS frontman Rob Dukes.
Together with Rob Moschetti (ex-PRO-PAIN / M.O.D.) on bass & backing vocals, dual lead guitarists Jason Trenzcer (ex-MUTILATION) & Jason Velez, and James DeMaria (ex- MERAUDER) on drums, GENERATION KILL has completed work with producer Zeuss (HATEBREED, AGNOSTIC FRONT, MUNICIPAL WASTE) on their second studio album (and follow-up to 2011’s Red, White And Blood) to be released later this year.
Culling the band name from the title of the 2004 book (also an HBO mini-series) written by Rolling Stone journalist Evan Wright, GENERATION KILL vocalist Rob Dukes comments on the band’s time in the studio & the recent worldwide signing:
“We all reached down and made a good record. Zeuss really helped us bring out things in all of us we didn't know we had. We fought, we argued, and in the end, each of us rose up to the challenge and wrote good fucking songs. I want to thank everyone at Nuclear Blast for having GENERATION KILL become part of the greatest metal family.”

Producer Zeuss adds: "This album is not an EXODUS clone. This is an album of music where five guys got together and explored our own roots of music, the records we grew up listening to and [then] wrote songs paying homage to what we love."
Nuclear Blast A&R Manager Jaap Wagemaker weighs in on GENERATION KILL & their addition to the label roster:
“With the release of their debut, Red, White And Blood, we knew that something special was brewing in New York! The band is playing a different kind of thrash metal - not just straight in-your-face but also elements from hardcore and alternative are used, not only in the music, but also in the vocals. Rob is mostly known for his aggressive vocal style in EXODUS; you will be very surprised to hear a different side from him. Two months ago, we had the chance to see the band play as support for HEATHEN. We were blown away by the sheer live power of this outfit. All members have a lot of experience playing in New York and are longtime friends. They really know their music and it shows. We at Nuclear Blast are very impressed by the new tracks and are very pleased to welcome GENERATION KILL as new members to the Nuclear family. GENERATION KILL are here to destroy and leave no prisoners behind!”

DMC will be on That Metal Show promoting our new project.

On May 31st we will release the first single off the upcoming DMC Solo album. Fired Up is the title

We are Headlining this event. We play on Saturday Aug. 15th

its a charity event. 24 bands including DMC/Generation Kill