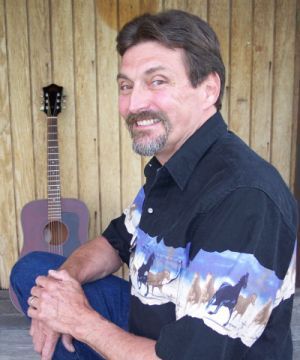 “When you feel life is filled with good, you’ll see,
that we’re in Heaven now”. Lyrics from Harland Allen’s song “Heaven Now”
Harland Allen's unique style is the result of a lifetime of musical influence from Hank Williams to Cat Stevens. Harland’s original songs combine his genuine unpretentious lyrics and mellow vocals, with his amazing guitar playing, for a blend that is unique, exciting and heart warming. His songs resonate with feeling, compassion, and zest for life. Harland has a beautiful baritone voice with a near two octave vocal range (well beyond two octaves when singing falsetto) and an old style country / rockabilly guitar playing style. He’s been a professional musician and entertainer since 1977. At that time he performed songs by artists like James Taylor, Cat Stevens and The Eagles along with his favorite country and folk songs. Since then he has performed as a soloist, in duos, trios and in four and five piece bands. The cover songs he plays range from James Taylor and Cat Stevens to Hank Williams and Jimmie Rodgers.

Born in Missoula, Montana and raised in Lakewood, Colorado he now lives in the Black Hills of South Dakota.

Actor, Harland Allen
In 2012 Harland started pursuing a career in acting. Since then he has had several acting roles including a web series, local and state television commercials including speaking roles for the South Dakota State Lottery. His film acting includes being cast as "Gene" in the short film "Hikethemovie" / “Walter’s Return”, cast as Larry Belasco in “Never Been To Graceland" and he played Shack Kazinski in "The Long Look Back".