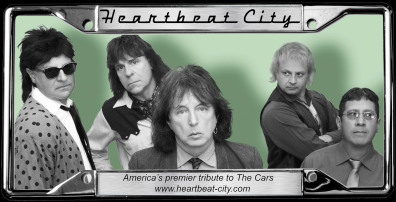 HEARTBEAT CITY: It's the name of one of The Cars’ biggest albums...more than 4 million copies sold. The album had 5 hit singles including "Drive," their top selling single. It's also the name of America's number 1 Cars tribute band. The band accurately re-creates the look and sound of The Cars at their peak...and for good reason.

HEARTBEAT CITY: Its members have a solid footing in the music industry, which guarantees a professional, concert quality show featuring hit…after hit...after hit. Who doesn't like The Cars? They were the epitome of 80's rock/pop with multi-platinum albums and singles...all in a very unique and fun style. Heartbeat City is as close as it gets to the real thing!

We are thrilled to announce that Heartbeat City has been given an opportunity to interpret, arrange, and record an unfinished and unreleased song by Cars bassist, Benjamin Orr. The song is called “Open Your Eyes” and was never completed due to Benjamin's untimely death from pancreatic cancer in 2000.

Producer/songwriter Dave Harris (Rob Thomas, Julian Lennon, Jon Secada, Rick Springfield, John Waite, Robin Gibb, and of course, the late Benjamin Orr) became interested in this song through his connection with Ben's girlfriend Diane Grey Page, who was also Ben’s songwriting partner (she appeared in his solo hit video for "Stay the Night"). Harris had been working on this song for some time, collaborating with various songwriters along the way.

Dave asked us to record the song with the request: “Make it sound like The Cars.” After several rehearsals to define the sound we were looking for, Heartbeat City went into the studio in early October and laid down the basic tracks. The song is in the final mixdown phase at press time and will be released on a benefit album for a rare childhood condition called Kawasaki disease. Dave has co-written all of the songs on this record and there are some big names involved including Vince Gill who has contributed some fine guitar work.

We are honored and proud to record this song. It was a wonderful opportunity to put our knowledge of The Cars to use and imagine what Open Your Eyes might have sounded like had Benjamin Orr had the opportunity to complete the song himself. Keep your eyes and ears open for the release of the benefit album, a behind-the-scenes music video of the recording session for Open Your Eyes, and for live performances of this rare song at upcoming Heartbeat City shows! More Soon!.....

Witnessing a performance by Heartbeat City is as close as it gets to attending a real live Cars concert and it just got a whole lot closer!  Heartbeat City is very pleased to announce the option of having original Cars keyboardist Greg Hawkes as a special guest on our show. Greg is an excellent and exciting addition to consider. There is a reasonable extra fee for this option. Please visit our Contact page and inquire for more information.

not open to the public