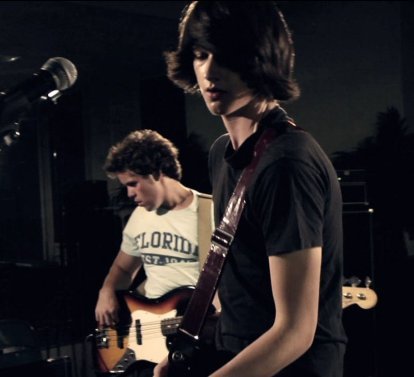 As lead singer and songwriting voice behind Orlando's Sound Express, 15 year old Henry Black has covered a lot of ground in the first few years along his musical journey. At age 12, Black began to sing, write, and play guitar with purpose. He become an early and ardent fan of Tom Petty, a fellow Florida musician just a few decades his senior. Black's guitar-playing and songwriting soon grew by equal leaps and bounds as he spent a significant amount of his 13th year playing with local blues musicians honing his own sense of the blues guitar form, one of rock and roll's most important foundational sounds. Although Black has gone on to absorb music of all kinds from multiple eras, from the Beatles to Nirvana to Black Rebel Motorcycle Club, Black's artistic path remains in parallel to Petty, his earliest influence, strongly rooted in the 60s rock sounds of British Invasion and American garage.
Seeking allies that shared Black's musical voice of sharp, concise songwriting mixed with thick rock guitar textures led him to one of Orlando's finest rhythm sections, bassist James Killgallon and drummer Anthony Manzo. Though young themselves at ages 19 and 24, respectively, Killgallon and Manzo are established veterans of the Orlando music scene. The fusing of Killgallon's melodic sense found in his bass playing, singing, and songwriting paired with Manzo's thunderous drumming brought the sounds in Black's head to life. Sound Express was born quickly creating a buzz on the Orlando scene in only a few short months.
The band has opened for multiple nationals including The Paper Tongues, All Star weekend, Devon Allman, Kenny Wayne Shepard, Buckethead, Creed and more. They played in Orlando Calling’s inaugural year playing on the same day as Robert Randolph, Buddy Guy, Los Lonely Boys,Warren Haynes, Bob Seger and The Doobie Brothers.
With hooks that stick in your head for days and licks that get the most awkward foot tapping, Sound Express honors the strength of rock and roll's past by bringing it into the present.