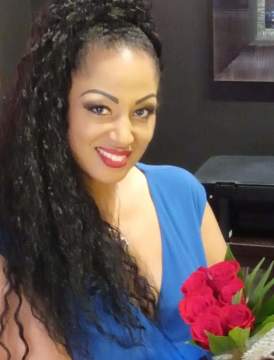 Jacnique Nina is the lovely, living embodiment of the Yin and the Yang as they cycle through the music universe. As a giver, she has graced the world with lush, soulful and heartfelt love songs in every flavor, and as a radio and internet TV host, she is graciously showcasing the music of others on her Love Jacnique Nina Radio platform. For these offerings, she has received numerous awards, accolades and – most importantly- a fervent loyal fan base that adores her music and sings her praises.

2022 promises to be a banner year for both Jacnique (pronounced zha-neek) and her fans/friends. Jacnique has just released a hot new retro R&B/Pop single entitled, “This Is The Life” featuring Ricardo Love and Phat Ca$h. She has also recently won the Akademia Music Award for Best R&B/Soul Song for “This Is The Life”. Jacnique is releasing many more new singles, including duets with Howard Hewett and Temptations tenor, Ron Tyson, on her new record label and film company, Love Jacnique Nina Music And Film Media. Jacnique’s new album will be released in March of 2023.

On February 14th of 2021, Jacnique released the 25-song anthology/mixtape “Audio Portrait of Love”, overflowing with highlights from her previous albums, singles and EPs. This collection represents Jacnique’s personal favorite songs from her catalog culled from her debut album Trial by Fire (produced by Ricardo Love), the Rise in Love Deluxe EP, her second album Eternal Love, and her third album Wish of The Heart (the widely acclaimed CD that began her collaborations with Preston Glass, leading to airplay around the globe including on Sirius/XM’s Watercolors channel and also making the coveted Allen Kepler “Smooth Jazz Top 100” chart, as well as charting on independent Smooth Jazz and Soul Music charts in Europe). Highlights include “Believe in Love,” “Audio Portrait,” “The Reason,” “Toy Box,” “So Sweet” and her lyricized duet version of Kenny G’s “Songbird” featuring Phillip Ingram of the adored R&B group, Switch, on vocals and trumpeter, Willie Bradley. The perfectly titled Audio Portrait of Love anthology will be the first release on Jacnique’s new record label and film company, Love Jacnique Nina Music And Film Media - available as a digital download on her website, LoveJacniqueNinaMusicAndFilmMedia.com, as well as, on Apple Music, Amazon & most digital music platforms. Physical CD copies of the collection are also available as volumes 1 and 2. “Audio Portrait of Love” is also the title of her brand-new radio show and documentary series featuring the biographical stories of iconic artists and noteworthy independent music artists.

Jacnique owns most of her music catalog. Her publishing company is SirenFire Music Publishing.

As if all of that was not enough love, Jacnique has also created her broadcast platform, Love Jacnique Nina Radio, a streaming internet radio station, which will launched on June 1st. Broadcasting from LoveJacniqueNinaRadio.com, Jacnique presents recordings of the finest in Jazz, Smooth Jazz, Smooth R&B/Soul, Spoken Word, Gospel, Dance and Funk as performed by great artists from all over the world. She also opens her studio to artists where she interviews them on-air and on-camera, and features them playing and singing in intimate live settings.

Jacnique Nina has long-dazzled audiences up and down the West Coast with her transfixing voice, exotic beauty and inspired songcraft. Jacnique is ever on a mission to turn hearts and minds to the true spirits of impassioned romance, scorching sensuality and unconditional love. With the very best of her past music now lovingly, generously anthologized as Audio Portrait of Love and with a phenomenal new project coming out in November, this wondrously gorgeous and giving spirit is primed for her presence to be known and loved around the world forever.

JACNIQUE NINA TO OPEN FOR SMOOTH JAZZ ICON, TOM BROWNE AND THE ELECTRIFYING WILL DONATO IN MARCH OF 2022

Please join us for an incredible show on March 6th, 2022 at Steven's Steak & Seafood House in Commerce, CA in the Los Angeles area as JACNIQUE NINA opens for Smooth Jazz Icon, TOM BROWNE and The Electrifying, WILL DONATO!!

"This Is The Life" featuring RICARDO LOVE & PHAT CA$H

Los Angeles, CA -- Singer/songwriter Jacnique Nina (pronounced zha-NEEK Nee-Nuh) spent many years striving to arrive as a woman who fluently speaks music’s loving tongue. In the traditions of siren sisters such as Sade and Minnie Riperton, Jacnique sings deliciously confessional and intimate statements on life and love. Such immaculate offerings inhabit her latest album, Wish of the Heart, released on March 7th, 2018, on SirenFire Music Works.

Wish of the Heart, Jacnique’s 3rd album, was produced by prolific songwriter Preston Glass who has conjured bliss and magic for the finest of female singers, including Natalie Cole, Phyllis Hyman, Whitney Houston and Deniece Williams. Among the highlights is a very special, poignantly novel 30th anniversary vocal version of Kenny G’s international instrumental gem “Songbird.” Master songsmith Glass added an evocative new lyric sung as a duet between Jacnique and Philip Ingram (lead singer of '70s soul group Switch) featuring Willie Bradley on trumpet. This heavenly revisited “Songbird” is on Wish of the Heart as both a ballad and a gently grooving U.K. Dance Club Mix.

Adored among longtime fans for her warm, singular original material that speaks to love as a rejuvenating force of romance, sensuality, hope and eternal happiness, Jacnique dazzles with the divine new songs “Wish of the Heart,” “Weapons of Love” (featuring Reggie Calloway on flute), “He’s a Keeper” (featuring the bouncin’ boogie bass of “Ready” Freddie Washington), “Blue 'Til You,” “Turnt Up Kinda Love” (featuring piano and keyboard bass by smooth jazz mainstay Rob Mullins), “Soul Candy” (a duet w/ newcomer Brandon Wattz), “Steppin’ Out On Faith” and “The Bright Side of Goodbye” (featuring a lovely piano solo by Brian Simpson). These selections and more guide the listener on a sublimely navigated journey through the heart and mind of a jazzy, soulful lady who puts LOVE first in all areas: love of self, love of her man, love of man and womankind, and love for The Creator.

New Release! "Wish of The Heart" by JACNIQUE NINA

New Project by JACNIQUE NINA, "Wish of The Heart"

There is a void in the world’s landscape today, of
of what used to be “basic human ingredients of ‘LOVE
and COMPASSION’”…..The need for these qualities
is what sparked the inspiration for Preston Glass to put
together (along with some dear friends with gifts of music)
this collection of amazing, moving and heart-tugging songs.
With stellar contributions by both established artists and
newcomers in the soul music realm, each selection stands
on it’s own, while aligns perfectly with all the others on
the album.
SOUL MUSIC RECORDS/PLATINUM
GARAGE RECORDINGS is proud to bring to
you and your consciousness these songs – in hopes that
they will feed your soul, help to fill that void, and stir all to
keep the ingredients of ‘Love’ and ‘Compassion’ in their
recipe for life.

This compilation project contains "Weapons of Love" by JACNIQUE NINA.

Click the link below to check out "Love & Compassion":

JACNIQUE NINA has been announced as the 2017 Akademia Music Award Winner of "Best Jazz Song" for her song "Sunrise".

Exclusive 1st Listen of “Wish of The Heart”
The New Music Project by JACNIQUE NINA
Produced by Hitmaker, PRESTON GLASS

Sponsored by THE BLUES AND R&B MUSIC FOUNDATION, INC.

TOM BROWNE and WILL DONATO with Special Guest, JACNIQUE NINA

Gatsby's Supper Club (Inside The Gambit)

Doors open at 6PM for dinner. Show at 8PM

Gatsby's Supper Club (Inside The Gambit)

Doors open at 6PM for dinner. Show at 8PM

An Evening of The Music of Sade