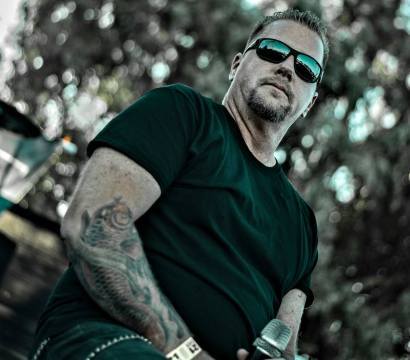 Jeremy started his musical journey in 7th grade when he joined the school band. With a hand me down clarinet in hand, he fell in love with music. He worked his way up to 1st chair quickly. Upon entering high school, he didn’t want to be a “band nerd”, so he hung up the clarinet. Jeremy wouldn’t return to playing music again until later in life. With having a family at a very young age, it wasn’t until age 23 that he picked up his first guitar. Having never lost the passion for performing, he worked diligently to learn all that he could with limited resources.

Having learned to sing while playing, a friend told him, “you have a great voice, you should try to develop it.” That’s just what he did. The guitar quickly took a back seat to his vocal training. Still raising 3 young children, there wasn’t enough time to actually put it to use in a band. For the next 10 year, he wrote and played music in his bedroom. During that time he was able to record an EP titled “Still Standing” which was tracked at a studio Burbank California.

At age 33 he started performing here and there as a solo acoustic act, gaining a small following. He was approached by a friend to start a band with a unique concept. Everyone in the band had to learn a new instrument. Jeremy then picked up a used drum set and became the drummer for “Irrelevant”. After a couple of years with the band, his desire to get back to singing, he assembled a new project named “Ghost Element”. The band quickly gained moderate success, and were well on their way to great things, when it all fell apart while tracking their debut album. Immediately he started looking for an existing band in need of a vocalist.

After many auditions, trying to find the right fit, he found a new home with Sacramento based band “Terra Ferno”. Jeremy would stay with the band for a few years. During this time, Terra Ferno welcomes a new drummer, Eric “Spaz” Lewis. Jeremy and Eric quickly became great friends. With similar taste in music and both wanting to take the same musical direction, they decided to leave the band and start a brand new project, named “Failure by Proxy” (FXP). During this time, Jeremy became more involved with Vet-Traxx Project Inc., a nonprofit organization run by Eric. FXP has quickly gained a large following and has played with many national acts, including Gemini Syndrome, Flaw, Oleander, Smile Empty Soul, The Mendenhall Experiment, Puddle Of Mudd and Buckcherry.

Failure by Proxy, Soulwood, RepresA, and Amongst Thieves helps start the Vet-Traxx Festival series of fundraising shows.  Come out to the launch party and help support Vet-Traxx Project Inc!

Kick of the summer with a bang, come check out SoCal's very own P.O.D. with special guests nonpoint, Islander, Nine Shrines, and Failure by Proxy

Failure by Proxy makes the journey to the bay area (LETS GO SHARKS!!!!) and will be playing with SJ Syndicate and Devil Inside.

The annual Vet-Traxx Festival is back and what is expected to be the best line up to date!  We have 3 nationals:  FLAW, BI·AS (feat ex Korn drummer David Silveria), Elisium, and some awesome local bands:  Failure by Proxy, Soulwood, Lioncourt, TriggerEffect, Terry Sheets Band, RepresA, Zeroclient, King's Revenge, Dreams of Madness, Warfront, and returning from the 1st Vet-Traxx Festival NaTas Lived.