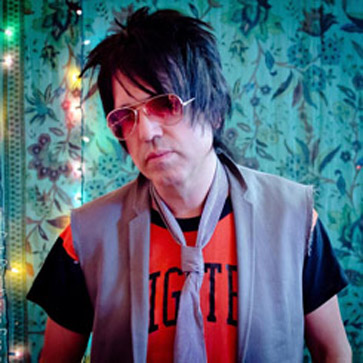 I am a full time musician, born and raised in New York, currently living in L.A. I also spend time writing in Nashville, Tennesee.

Logging in over a thousand live shows locally, I got my first real taste of the industry with the band Boystown. We signed a single deal in England with EMI, toured and recorded an album. My second break was a big one. I was lead guitarist/co-writer in the band Coward. In 1995, after only 6 months of playing around Manhattan, we managed to create a bidding war, and ended up signing a record deal with Elektra records. Shortly after signing the record deal, we signed a publishing deal with Warner-Chappel. We recorded our album in some of the world's best studios (Bearsville, Conway, Sear Sound) co-producing it with the late Jerry Finn (Green Day, Blink 182, Sum 41, Rancid, Butch Walker), engineered by Sean O’Dwyer. The Coward record came out in 1996; we made a video, appeared on MTV, and toured (mainly with labelmates Third Eye Blind).

After Coward, I moved to California. I played lead guitar and was Musical Director for Capitol recording artist Tommy Henriksen. The first single placed in the motion picture "Blast From the Past." After Tommy, I played guitar for Capitol recording artist Meredith Brooks ("I'm a Bitch").The band was massive: Herman Matthews on Drums (Tom Jones, Tower of Power, Kenny Loggins, Richard Marx), Will Hollis on keys (currently playing in the Eagles, Don Henley), Mark Meadows on bass (Edgar Winter, John Waite). It was with Meredith that I got to fulfill one of my childhood dreams, playing Madison Square Garden. We opened for the Eurythmics.Also played the Staples Center, did a bunch of TV shows (Jay Leno, Rosie O'Donnell, Queen Latifah, Martin Short). We toured around the US and Europe.

After that, I have been staying busy, writing, producing, and performing. Recently I have been working on my solo album, due out in the fall of 2015. I have also been touring with the legendary rock group The Babys, who have recently reformed and have since released a new album and a new single which was written by me. The single is called "I See You There".

Artists I’ve Performed With Or Shared A Stage With:

Nashville Collaborators (List of songwriters that I work with in Nashville):

Performed In These Countries:

The Babys on Rock Talk

In-Depth Interview with THE BABYS Joey Sykes, Tony Brock, Wally Stocker and John Bisaha, who recently sat down with Rock Talk's Dominic Forbes. Discussed: each members history in music, The Babys of the past, present and future and more.

The Babys on Feel the Steel

THE BABYS Joey Sykes, Tony Brock, Wally Stocker and John Bisaha sat down with Feel the Steel’s Paul Nicholls on Platinum Rock Radio in the UK.

The Babys on WECT- In-Studio Interview

THE BABYS were in-studio guests at WECT
Channel 6 in Wilmington, North Carolina, and news anchor Ashlea Kosikowski interviewed the band on their upcoming performances and more.

Click on the link to watch the entire interview.

Rob Watkins at Uber Rock submitted his review of Classic New Rock, and had this to say:

“Joey Sykes is an American singer/songwriter/guitarist/producer. He began...”

Click on the link to read the entire review.

Cyrus Webb, host of Conversations Live on The Conversations Radio Network sat down with Joey Sykes to discuss his album Classic New Rock, as well as thriving in an industry that many claim is “dead” and more.

“When I was first asked to write the review for the new Joey Sykes album, "Classic New Rock", I...”

Click on the link to read the entire review.

Joey Sykes sat down with Dr. Joe Burns, host of Rock School on KSLU 90.9 FM for a very
informative, revealing interview about his album Classic New Rock, as well as the state of the music biz, and life in THE BABYS.

Click on the link to read the entire interview.

Isn't it time to see THE BABYS perform classic hits and new music at this year's Redondo Beach Lobster Festival? Catch Ambrosia on the same bill when you order your tickets online.

THE BABYS will rock Westland, MI at The Token Lounge​ on Sept. 29th! Simply click on this link to grab your online tickets.

THE BABYS will rock Akron, OH at Tangier Event & Entertainment Center​! Simply click on this link to grab your online tickets.

THE BABYS will rock the Rockin' Blues Concert Series at Huntington Beach Library Theater in Huntington Beach, CA on Oct. 29th! Simply click on this link to grab your online tickets.

Contact Information
JOEY SYKES is available for hire at your upcoming event, as well as for publishing, production and songwriting.