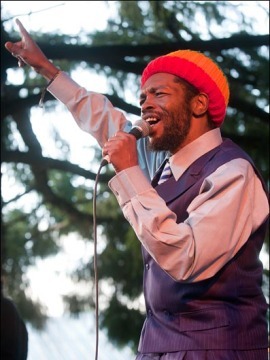 Judah first learned to play guitar as a youth in Jamaica, later singing back up and arranging harmonies for other artists before he moved onto creating his own musical projects.

Judah became involved with Twelve Tribes of Israel Organization in 1976, which inspired him to write more meaningful songs with powerful messages that in many ways captivated audiences.

In 1978 fellow Musicians and Twelve Tribes Members; Bagga Walker, and Pablove Black (who also happened to be Bass Player and Keyboardist for Studio One at that time) introduced Judah to Studio One producer Coxone Dodd.  Coxone having full confidence in Bagga and Pablove, as both were good musicians; demonstrated his lack of doubt in Judah by putting him into the studio without hesitation, and singles were quickly released. Judah recorded few covers and countless originals. A total of about eighteen songs were recorded in approximately a two year period from 1978 to 1980, of which six classic songs were released: including his first single “Jah Light”, “Rastafari Tell You”, “Always Trying”, “Conquer Me”, “Danger In Your Eyes” and  a 12’ titled “Just Another Day”.  Judah’s project to follow titled African Blood was never released.

Following his involvement with Studio One, Judah continued his musical career in the Jamaican music industry as Bass Player for the renowned Generation Gap Band with whom he recorded, and was credited as bassist on albums.  The first project was put together by artist Jah Love manager who wanted to record an album with Brigadier Jerry (Jamaica, Jamaica), and invited Judah to come onboard as bassist which he graciously accepted.

Over the years however, Judah learned that singing was more of his thing and admits that he never really enjoyed singing back up as much as he does singing lead, and has been quoted as saying that the feeling he gets from singing, he cannot acquire by any other means.

In December 1986 shortly after arriving in America for the first time, Judah met and collaborated with Cultural Radio Personality Jeff Sarge of 91.1fm New Jersey and recorded approximately 5 songs. Since then Judah has traveled throughout the world and played with numerous bands either as lead singer, guitarist or bassist which includes a collaboration with Guissie P circa 1993, while he was in England, which was released and is still seeing singles sold from that recording to this day.  More recently Judah has recorded and released music through the Twelve Tribes of Israel and with some of the current Roots, and Dubwise Producers throughout Europe and America. Of those recent releases a string of hits appearing off the Black Redemption label have created a renewed interest in Judah Eskender Tafari as a recording artist and for life performances. In the New York City Roots Scene, the Black Redemption Sounds of Praise live sessions with selector Ras Kush, Featuring Judah Eskender Tafari on Vocals has been greatly received to the point that their live DVD and CD recordings have been copied and distributed worldwide as a roots and culture phenomenon. This has made the USA a place of interest for this locally developed scene with Judah Eskender Tafari singing and sounding better than ever!

Today Judah remains one of the all time favorite singer/performer/writer/musician who connects with his universal audience though his message and live performances. A prominent fixture in the Los Angeles Reggae scene staying connected to his fans, which keeps him inspired and motivated to create new music for the people.His selection of songs range from his cultural lyrics to his studio one songs balanced with spiritual message of one universal love.

Judah is currently in the studio recording his newest works featuring collaborations with other local prominent artist, along with his project The Heartical Band out of Los Angeles, California.

Reggae In The Barrio II

Join Us as we bring some Roots Riddims to Arizona 420 Festival! Hope to see you all there!

Juah will be a Guest on Roots Time Radio to promote upcoming shows and more! TUNE INTO www.radiosombra.org   this and every Sunday afternoon from 4 TO 6PM

listen in, to find out how to get a free Judah Eskender Tafari goody basket and tickets to the June 11th Show at the EchoPlex feat. Luciano! Don't miss it.