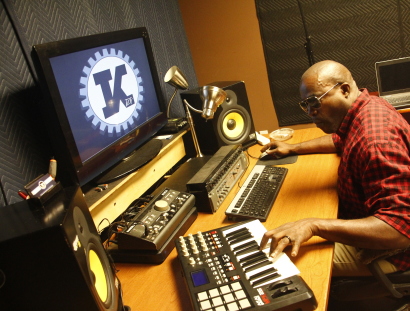 KTEK got his start in music when his mother bought him a Sony tape player. He took advantage of the recording capabilities of the gift and combined them with his love of music to entertain his friends by creating custom-made mixtapes. His tapes were so well-received that he was invited to DJ at local parties. Inspired by legendary artists like The Art of Noise, Michael Jackson, Sting, Phill Collins, Seal, KTEK developed a love of combining non-traditional sounds. His recording methods mix the elements of human sound, orchestral, and electronic pads and keys, which are the components of his one-of-a-kind sound. When KTEK was nine, Fu, a family friend, recognized his interest in music. He taught him the art of discipline through martial arts and music. During these sessions, he noticed a broken computer. He took it apart, fixed it, and earned the nickname TEK. From then on, music, computers, and software became his passion.

KTEK took on the job of Studio Engineer and became a founding member of the indie label Bloc2Bloc Records, where he honed his skills. KTEK created an in-house studio and recorded independent artists in his living room for six years. In 2015, he moved from the living room to a one-room studio in the building where The Grind Factory Studios was born. Since then, hundreds of artists have come through the doors searching for his unique sound and production. Many of his tracks have been used by independent artists and requested by music directors for commercial catalogs and audiobooks.

KTEK’s skills go beyond producing and engineering tracks. As an artist, he has a delivery that is constantly evolving, just like the tracks he produces. His unique, captivating style and guaranteed to make listeners toon in. His first single, “F Trump,” was an instant hit. He has collaborated with some of the best artists and producers in the industry. The most notable collaboration is with one of the top DJs in the industry, The World-Famous DJ Brad of The Legion of Doom DJs, for the 2019 release “The Boss and The Legend.”

KTEK’s resume has expanded to include acting with a summary of TV shows and movies where he can be found working. He can be seen in the reboot of The Game (2021) as The Barber for Malik Wright (Hosea Chanchez). Other shows included Ordinary Joe, Single Drunk Female, Memories, Long Slow Exhale, Heels, Genuis: Aretha, and BMF.

KTEK’s most recent work includes Scott Free, starring Columbus Short, Trey Chaney, Felicia Pearson, and was written and directed by Stephen Everson. The movie was filmed in East Point, Georgia, home of The Grind Factory Studios. He can be seen in the new release Immortal City Records, starring Mea Wilkerson, RonReaco Lee, D. Woods, and Terrence Green. Both movies can be streamed on Tubi.