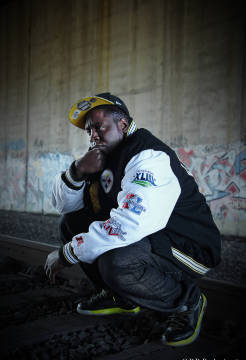 You'd think being a musician in 2016 would be easy with all the technology artist have access to. Truth of the matter is it's more difficult now than ever before. Being an artist takes sacrifice, commitment, and hard work. Urban music more specifically hip hop is a genre of art that reflects a particularly real life struggle for a large group of people. Now add to the fact that you're from an area not particularly known for contributing to the hip hop culture, and it make life that much more difficult. This is what Kadiz aka "The Heart of the City" brings to the table.

Born and Raised in Columbus, OH, and claiming the attribute from the city of his late grandmother, displaying a passion for music. Kadiz can explore just about any genre of music. Kadiz has been singing and rapping since the tender age of seven in church and community choirs. He picked up playing the piano and other instruments at Fort Hayes when he was sixteen and has been amazing audiences with his talents ever since. His songs and style are inspired by artist like Tupac, Nas, Donny Hathaway, and Dr Dre. Heartfelt lyrics put together over a variety of sound production. A chemistry that makes him a force to be reckoned with.

Kadiz released his first project with the indie based company Deka Records called "Suitcase of Memories" in mid 2010. Since that time he's been building both a viral and organic fanbase. His videos have achieved a good amount of success on YouTube, and he's ready to make a name for himself on the touring market in 2016.

Kadiz is young, charismatic, soulful, and lyrical. All the ingredients to make a young man from Columbus, OH into a star in the music industry. Influenced by the new, and older legends he wishes to one day become one of them.