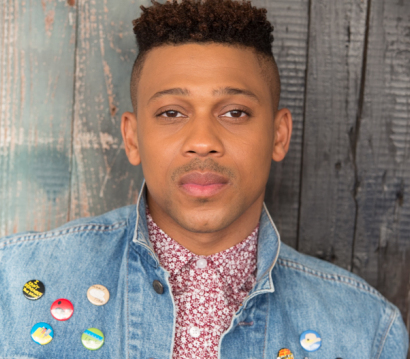 When Grammy Award-winning artist, singer, songwriter, guitarist, and actor, Kameron Corvet started strumming the melody for the then unfinished song “Don’t Make Me Wait,” on his Gibson Guitar, he never imagined the music would bring two musical legends, Sting and Shaggy, together to record a collaborative album, 44/876. Songwriting for Sting and Shaggy would be his most outstanding achievement, but not his only one. Corvet has created hit songs for an impressive list of legends, including Toni Braxton, Case, Freddie Jackson, Angie Stone, and more!

For Corvet (pronounced "Cor-vay") who began playing the acoustic guitar shortly before entering Morehouse College in Atlanta, having his talent recognized by musical icons, Sting and Shaggy, isn’t something he takes lightly. “Collaborating with Sting and Shaggy remains one of the biggest highlights of my music career. I never would’ve thought a song I composed and co-wrote would become the catalyst for an entire collaborative album or that it would become a global hit charting at #1 in over 14 countries and win a Grammy in 2018 for Best Reggae Artist. It’s been an interesting thing to navigate, and I understand the significance of the accomplishment more and more every day.” Corvet’s co-write of “Fallin” has found its home on Toni Braxton’s new album, Spell My Name. “It feels amazing to be a co-writer of ‘Fallin’ on Toni Braxton’s new album, Spell My Name. I distinctly remember parts of the writing process on Fallin’ and how easily the words and melodies came. It’s a true testament to the song being in the conversation, and I couldn’t be happier to collaborate with another legendary artist.”

Kameron's talent as a singer, songwriter, and guitar player has allowed him to exist between genres as an artist. “When people see a Black man with a guitar, the first thing they think is I’m either a country music artist or a folk singer,” shares Corvet, “but it’s time for a rebirth of our concept of Blackness! We are not monolithic.” A 4th generation singer/songwriter from Cincinnati, OH, and Baton Rouge, LA, Kameron currently calls Atlanta GA home. After earning a degree in French, he began teaching middle school French by day while pursuing his musical aspirations at night. After finally deciding to leave teaching and pursue music full-time, he wrote “Don’t Make Me
Wait,” on the couch in his Atlanta apartment.

The pandemic has slowed down Corvet’s international touring schedule carving out more time for songwriting and recording his forthcoming EP, Live from Kathy’s Basement to be released Fall 2020. “Live fromKathy’s Basement is inspired by and dedicated to my mother. Growing up in Baton Rouge and Cincinnati, the houses we lived in didn’t have a basement. My mom’s dream was for us to have a basement so we can run around inside the house and just be free! As I got into music, I imagined having friends over for jam sessions. I always dreamed of buying her the house with the basement once I “made it” and while I’m still making my way, I wanted to give her a basement figuratively. So, Live from Kathy’s Basement is me and some of the best musicians on the planet (who happen to be friends), jamming in the virtual basement I’ve created in her honor.”

Jamming with Corvet in Kathy’s Basement is Lil’ John Roberts (drums: Janet Jackson, Ne-Yo, Stevie Wonder, George Duke, Prince, George Benson); Darrell Freeman (bass guitar: Drake, Raphael Saadiq, Kim Burrell, Marvin Sapp, Glenn Lewis) Bruce Robinson (lead guitar: Fantasia, Ro James) Justin C. Gilbert (piano: Justin Timberlake, Alicia Keys, Jill Scott) and Pierre Medor who also serves as the project’s lead producer on keys. Grammy Award-winning engineers Ralph Cacciurri and Dru Castro serve as the main engineers along with Will Lovely and Anthony Majors. He shared a few songs with his musician friend, producer, and 9x Grammy Award-winning songwriter Bryan Michael Cox. The single “N-U” was instantly added into rotation on Cox‘s IG Live #LoveZone virtual R&B party, where it is now a signature song. The exotic lyrics, “Be my weakness/Our bodies movin’ up and down in sequence/And for what it’s worth/I wanna repeat this/I wanna take you deeper than your deepest/Ima put that work/N-U, N-U” are ones you can’t get out of your head. The melodic cool of Corvet’s first single, “Give It A Try,” from Live from Kathy’s Basement is about the moment of surrender when a heart hesitant to love finds itself warming up to the idea of a committed relationship.

Stuck in isolation during Covid-19, the talented singer/songwriter has introduced the world to other sides of his personality. You can find Kameron consistently live streaming, hosting, touring, and collaborating with major recording artists in addition to creating new music for himself. Instagram is his virtual home; the moment you see Kameron, his signature picture collage wall, you’ll know you’re in the right place! He hosts two virtual shows, “Acoustically Yours: The Live Stream” a series of acoustic performances that often feature a surprise guest stopping through to jam and “Kandid” conversations where you get to know Corvet’s celebrity friends intimately. Launched on his Instagram Live and airing every Tuesday & Thursday at 5pm, Kameron has intimate conversations
with artists like Lecrae, RL of Next, Kevin Ross, Eric Roberson, CASE, Nicole Bus and more.

Those in the International music world know Kameron as a longtime collaborator of international superstar Mr. Probz, including writing and featuring on the single “Turning Tables.” Corvet’s first success as an independent artist came through his 2012 EP, F_ck, Love. Since then, he's consistently released new music, including his most recent EP Early Riser. He's shared the stage with Adele, Chaka Khan, Erykah Badu,and TyDolla$, to name a few.

Opening set for Chaka Khan at the Johnny Mercer theater inside the Savannah Civic Center.

Opening for Algebra Blessett at City Winery in Atlanta

Kameron performs as a part of an all star crew for the 2nd annual Prince tribute at Centennial Olympic Park for Majic 107.5FM.

Kameron Corvet is a featured performer for 3 Shades of Soul

Kameron Corvet performs with The Bounty Hunters at The Beverly in Atlanta, GA

Contact Information
Feel free to connect with me via email or social media.
Information Request