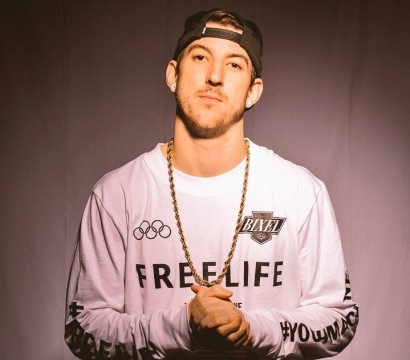 Cody Guynn also known as his moniker: KHAOS Grew up around music at an early age, he laid his hands on his first musical instrument at the age of 11. Since then he has been on the rise in the Electronic scene in Tennessee taking stage after stage with pure energy and mind blowing tracks constantly leaving each dance floor in a complete mess of bodies. Staying quite in the shadows and learning from veterans in his area.

The past two years Khaos has really begun to gain a hometown following, with over the past couple of month focusing on production, he has put forth some ear catching collaborations and remixes. Most recently getting his hands on Thomas Jack- Rivers ft. Nico & Vinz (Abellion & Khaos Remix) breaking over 17K plays on Soundcloud.

Known for sharing the bill with artists such as Adventure Club, Datsik, David Heartbreak, Figure, Flosstradamus, Heroes x Villains, Kennedy Jones, LOUDPVCK, Ookay, Victor Niglio and taking stages across the southeast for Life In Color, Monster Block Party and was a part of Party Basics's Miami Sessions for WMC'15. As a resident DJ at Tempt Nightclub, has also performed at established venues through out Nashville, Knoxville, Chattanooga and Atlanta areas.

KHAOS has shared the stage with the following artist as support:

Very excited to continue the momentum that was built throught out 2017 into the new year. Bookings are starting to come in and KHAOS wants to visit your city next!

Hit up your local promoters and venues!

My schedule is looking great as I am starting to add shows traveling all around Nashville and hopefully to land booking in Virginia and Texas soon! Hit up your promoters and tell them you want to see me perform at your favorite venue!

ONLY $5 COVER!
Not even IHOP serves Pancakes this CHEAP!

After Shock After Hours

**HERE WE GO AGAIN!! THIS WEEKEND IS GONNA BE A BUSY ONE, WITH BORGORE, GIRAFFAGE, AND G EAZY ALL PLAYING SATURDAY NIGHT. WHEREVER YOU CHOOSE TO BEGIN YOUR NIGHT, BE SURE TO END IT WITH THE AFTERSHOCK CREW AT NASHVILLE'S ONLY AFTER HOURS SPOT. WE'LL SEE YOU ON THE DANCE FLOOR!!**

KHAOS
************
Cody Guynn also known as his moniker: KHAOS On the rise in the Electronic scene in Tennessee who is taking stage after stage with pure energy. Leaving each dance floor in a complete mess of bodies. Growing up around music at an early age, he laid his hands on his first musical instrument at the age of 11. Staying quite in the shadows and learning from veterans in his area. The past two years Cody has really began to gain a hometown following, as an resident DJ at Murfreesboro's Tempt Nightclub and has also played at established venues through out Nashville, Knoxville, Atlanta areas. (Anthem, The Rosewall, SEEN, Marathon Music Works (Haven Luxury Lifestyle Events), and The International (formerly known as Blackstock Exchange)

MIKE VULCAN
********************
No matter if you need a fix for break,step,drone,bass,power,
trip,glitch,acid,jungle,thrash,
hard,drill,hip,gutter,dub,speed,hop,ragga, electro, juke, deep,HighConcept,mash,tech,dub,death,apocalyptic,noise,distortion,low-fi,folk, grind,dirty,core...Mikes Got a little something to knock ya cap back and leave ya smiling!

GLOWSTIK NINJA
**************************
>>Electro/House/Hardstyle/Hip-Hop/Dubstep<<
Nashville's filthiest attraction, Glowstik Ninja has become synonymous with the darkest nightmares of EDM. Since 2003 the underground dance scene has been terrorized by his onslaught of explosive drops and spine wrenching remixes. A resident DJ of MixWhoreRadio.org, where the Ninja delivers a weekly injection of grime that has been known to crash servers. From house parties to bars and even conventions, Glowstik Ninja continues prove his ability to move a crowd. The dance floor is not safe...
Ultimo Productions, Bass Warp Presents, After Shock Productions, Avary Entertainment

Cameron Farrell, also known as Niraya, has been producing Electronic Music for 5 years. Starting out, he was extremely into Dub and the reggae vibes that came along with it. As the years progressed, he started broadening his interest in other types of Electronic Dance Music such as Drum & Bass, Moombahton, House, Trap, etc. In the more recent years, he has gotten more into live performance. Sharing the stage with the likes of Brillz, Getter, SKisM, Victor Niglio, and CRNKN, just to name a few. Passion driven, Cameron is determined to make a name for himself in the Electronic Dance Music scene, first locally, then nationally. Be on the look-out for all original tunes from this guy as well as remixes and collaborations!
http://soundcloud.com/niraya
https://www.facebook.com/nirayamusic

Worth the Wait Wednesday

We are so excited to present Road to Euphoria Music Festival 3/18! With the purchase of every ticket you have a chance to win 2 passes to Euphoria 4/10-12 in Austin, Texas! Featured are two acts from the festival, Modern Measure & Vibe Street! Along with support from KHAOS &
Wilsdorf!

Modern Measure is a hybrid electronica project like no other. Formed in Atlanta in 2013, MM has already set the bar high coming off of sold out performances in Atlanta, as well as touring across the United States, and a huge set at CounterPoint Music Festival. Kyle Holly shows you his musical vision through this project. Taking tracks he's produced in the studio, he then passes the tracks over to Charlie Thornton, for live manipulation and performance for a true Live DJ/ Live drummer combination that is a serious force to be reckoned with. In just a few short years, Modern Measure has shared the stage with acts such as STS9, Big Gigantic, The Disco Biscuits, Papadosio, ZOOGMA, Pnuma Trio, The Floozies, Break Science & many more. Guided by inspiration and sheer love for the music, Modern Measure creates a positive environment for both listening, and a complete live music experience. Thanks to Modern Measure's record label, 1320Records, MM continues to push the boundaries releasing remixes, EP's, and a soon to be full length album. Take note, as Modern Measure is a name to watch, and a name that you will continue to see for years to come in music.

Vibe Street (Ben Davis) brings a flavor that is unrivaled in the world of music today. Davis has coined the genre "Grass-Hop/Future-Folk" to describe his unique sound - ranging from feel good, blue-grassy tunes, to spacey, soulful electronic beats that can rock a late-night dance tent. Combining forward thinking and versatility. Vibe Street was recently added to a Northeast tour run with Break Science & Marvel years. Beyond Euphoria Ben will also be playing Paradise & Resonance festivals.

Cody Guynn also known as his moniker: KHAOS Grew up around music at an early age, he laid his hands on his first musical instrument at the age of 11. On the rise in the Electronic scene in Tennessee taking stage after stage with pure energy and mind blowing tracks constantly leaving each dance floor in a complete mess of bodies. Staying quiet in the shadows and learning from veterans in his area. The past two years Cody has really begun to gain a hometown following, sharing the bill with artists such as Adventure Club, David Heartbreak, Doctor P, Figure, Heroes x Villains, Kennedy Jones, LOUDPVCK, Ookay plus many more. As a resident DJ at Murfreesboro's Tempt Nightclub he has also performed at established venues through out Nashville, Knoxville, Atlanta areas. (Anthem, The Rosewall, SEEN, Marathon Music Works (Haven Luxury Lifestyle Events), and The International (formerly known as Blackstock Exchange)

Join us in the late afternoon as we celebrate life and music! We will break the sun down and rise the moon up in all the right ways! Free Party

Chicago's top two resident DJ's! ZEBO & PHNM take the stage as Light Em Up, make sure to get the app and be part of their interactive set. The crowd decides the direction of the night based on the genre's that are voted for through the app throughout the night lightemup.co

Though they have been perfecting their craft since 2010, Slander has splashed onto the dance music scene with the feel of an overnight success story. Veteran DJ's as well as skilled producers, their releases have catalyzed a devout following, garnered millions of listens, and even has seen them craft their own genre dubbed "Heaven Trap."

Even with their rapid rise, they are no stranger to support from the industry's top producers including DJ Snake, Diplo, Carnage, Clockwork, Krewella, and Adventure Club. With past performances at Nocturnal Wonderland, TomorrowWorld, Moonrise Festival, Something Wicked, and more, Slander has had the opportunity to show their tracks are festival worthy. The best venues from coast to coast have brought the LA duo out to headline, including Webster Hall (NYC), Sound Bar (Chicago), Create (Los Angeles), and they just recently signed a long term deal with the #1 club in North America, XS Las Vegas, alongside fellow residents Avicii, Deadmau5, David Guetta, Zedd, and Skrillex. Undeniably the fastest growing act in dance music, Slander is poised to make 2015 their year.

Contact Information
KHAOS is looking to play in your play at your venue/city this year. Big moves in the works.