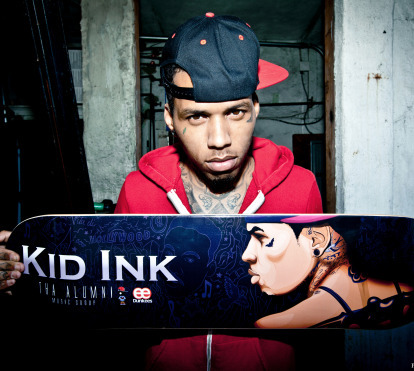 23 Year old Los Angeles, California Rapper/Producer/Songwriter Kid Ink, is making some serious noise right now online and in the streets of Los Angeles after just dropping his debut Mixtape "Crash Landing" which was A&R'd by DJ ill Will.

Ink started his career mostly on the production side, working with such notable names as Sean Kingston, Yung Berg, Diddy and Nipsey Hussle before picking up the mic just a few short years ago.  Says Kid Ink "I started making the beats since we already had several artists trying the rap thing out, so I thought I would be more useful supplying the production." Growing tired of waiting on people to jump on his beats, Ink started dabbling in the songwriting first by creating hooks to go with his beats then eventually creating complete songs.

After teaming up with DJ ill Will in early 2010 Ink decided to buckle down and focus on the Rap side of things and immediately began working on "Crash Landing." After 4 months of hard-work "Crash Landing" was dropped online to rave reviews and rose to the top of the Datpiff.com Top Mixtapes of the Week section amassing over a total of 50 thousand combined downloads in just the first 10 days of release.
Accompanied with all original production as well as major label features from the likes of Young Money's Gudda Gudda, Roscoe Dash, Sterling Simms, Bei Maejor, Meek Mill and more - Kid Ink took the net by storm; releasing 8 major music videos alongside Director Alex Nazari for this project.

Kid Ink is currently in the studio working on his new project "Daydreamer" which will drop sometime this spring. The first record and official street single off this project "Lowkey Poppin" Produced by The Runners will be dropping on March 1st everywhere. You can expect features from the likes of Tyga, Gudda Gudda, Chris Brown, Avery Storm, Sean Kingston, Cory Gunz & more on "Daydreamer."

A collection of Fan Art

Kid Ink & The Alumni team head to Phoenix, AZ on June 1st for a show at the Madison Event Center.

Ink invades canaade for his first show in Toronto, Canada!

Kid Ink set to rock his hometown on August 20th with his show at the LA Sports Arena.

Serious Inquiries Please. This is a contact for Kid Ink's management and NOT Kid Ink personally. While we appreciate all the fan emails, please only reach out for business purposes. Thanks.
Information Request