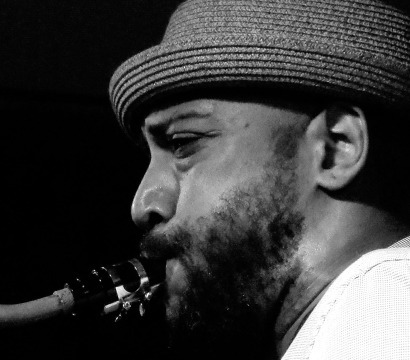 Kwame Hall is an Alto Saxophonist and composer born and raised in Philadelphia on November 6, 1976: a date shared with the inventor of the saxophone Adolph Sax. Kwame Hall comes from artistically inclined parents: his mother, Cynthia Lawson, the owner of 2chicdesigns.com and his father, George Hall, a drummer, who studied at Berklee School of Music.

He was first introduced to music by his mother who had enrolled him at the Settlement Music School where he studied the Suzuki method. Kwame started playing the saxophone at the age of 9 years old. At that time, Kwame’s teachers were Rufus Harley, Tony Williams, and Rayburn Wright. He started to play jazz in highschool and started playing around the city with Tony Williams Youth Ensemble and the Philadelphia Cleff Club Youth Ensemble. After highschool, he went to FAMU where he studied with Victor Goines and then transferred to Long Island University in Brooklyn, NY where he studied with Peter Yelling.

Kwame first received his taste of working in the industry performing at Radio City with Hezekiah Walker. He worked with Bilal, Ugo ,SLB , Orrin Evans, Duane Eubanks, and TC III. Recently, he opened for Azar Lawrence at the Ethical Society in Philadelphia. Since introduced to jazz, Kwame Hall has had a strong support system that reinscribes the motto of the city of brotherly love. Shirley Scott, Trudy Pitts and Mr C, Bootsie Barnes, Mike Boon, Terrell Stafford and Tim Warfield mentored Kwame throughout his career. Like the greats that came before him, he keeps the tradition of African American Classical music also know as Black American music, formerly known as Jazz.

Currently, Kwame teaches Jazz to aspiring, young musicians at the renowned George School in Newtown, Pennsylvania by day and entertains people of this region by night. He is well-known and highly regarded in the Jazz communities in Philadelphia, Bucks County, New York, and abroad in Paris, France. He continues to play Jazz using his creativity and passion to keep his fans entertained and to gain more curious, listening ears.

Contact Information
For more information or to meet/book Kwame, please contact his publicist, David, at 267-760-7331 or email him at LeodinRosePR@gmail.com.
Information Request