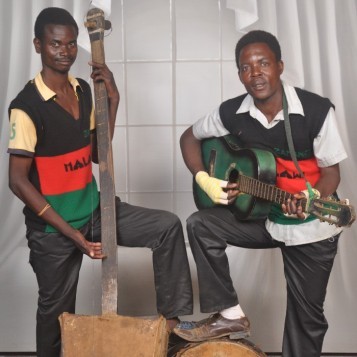 Intuitive, authentic, and full of ruthless rhythms, Malawian Madalitso Band has taken Europe by storm. Madalitso will make you clap, dance, smile, and rethink everything you thought you knew about African sound and instrumentation. Madalitso is authentic to the core and coming on tour once again after demand from clubs and festivals from Europe to the USA.

The traditional duo from Malawi, who in the last year have been featured on BBC Africa, and performed at such festivals as Roskilde in Denmark, were first discovered by a local producer busking outside a shopping centre in Lilongwe in 2009. The connection that the musicians gained with each other through living this way for 10 years is evident in the way they burst onto the scene, after their very first performance outside Malawi, in 2017, at Sauti Za Busara in Zanzibar. 6 months later and they were on an aeroplane for the first time in their lives, to do a 2 week European tour, and wow audiences with their down-to-earth nature, and raw on-stage energy.

A new album is being released in March 2019 under Bongo Joe Records, a label from Geneva, who instantly fell in love with the Madalitso ethos, when the music inside is so strong that it says, "so what that we can't afford instruments, we'll build our own." The music inside Madalitso Band is SO strong, and it comes out effortlessly, full of syncopated rhythms, lush harmonies and a solid back beat

.
Two nice guys from the village in Malawi, smiling their way around the world and bringing dancefloors to life. What's there not to like about that.

Madalitso will play major fesitvals in Europe and Africa

Roskilde Festival in Denmark, HIFA in Zimbabwe and Lake of Stars in Malawi have all announced that Madalitso band will be bringing their vibes to their festival stagesa this year. Look out!

Now you can find Madalitso band playing every last Thursday of the month at the Lilongwe Wildlife Centre's monthly get together.

Near the historic Livingstone tree, Madalitso will start procedings for Saturday's music at the fifth Nkhotakota festival.

Listen to the band live on BBC's Global Beats

Rita Ray hosts this show which takes some of the best acoustic acts in an intimate setting by the Indian Ocean. Madalitso's part of the show starts on 45 minutes

Madalitso make it in ZIm news

Standout groups included Malawian Madalitso Band, who played their music using traditional instruments and delivered soothing melodies. The simplicity and organic sound of the band mesmerised the Amphitheatre stage in the Old Fort.
.

It was our first time to leave the country or stay in a Hotel, and when we saw African artists arriving from all around the world, we just knew we had to play our music and see what came next. It was amazing that all these people appreciated the music so much. This experience was the begining of something new for us.

Playing for the first time in Zimbabawe at HIFA, one of Southern Africa's biggest festivals.