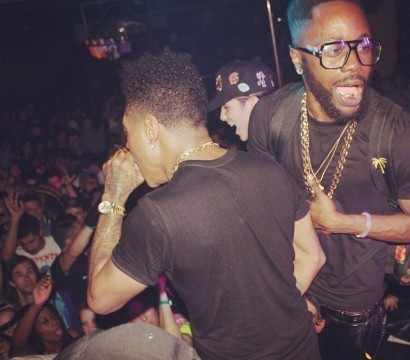 Known as one of the top music managers in DC, MD, VA, music and entertainment, Sean Anwar Thomas aka MayorOfDMV has worked tirelessly behind the scenes to make key connections and business deals within the industry. As a former indie road manager who worked for DC’s Brother Maniac and Hip-Hop for The Homeless Tour, MayorOfDMV is responsible for helping road manage and promote LiL B The Based Gods 1st east coast tour and along with Lil B is the brainchild behind the early 2000s Basedworld movement. In 2009, he teamed up with friends Brandon McCartney and Sabastian Demian to launch the indie BasedWorld.com website, which landed him at the door of musical artist Soulja Boy and a cult following, which earned them the top performance bid for New York Santos Party House in 2010.

Three years later, after working with countless acts such as Riff Raff, Beenie Man and several others, MayorOfDMV founded the boutique label, SGod Records, and landed rappers Anthony Goff, Yung Horus and Kemet Dank God as their first signing, which brought national attention to their hometowns of Baltimore, Memphis and Louisiana. Through SGod Records, MayorOfDMV created MayorOfDMV Management, which gets indie and emerging artists involved in learning marketing, artist self-development and revenue generation.

MayorOfDMV hosts full service booking and indie artist management based in the city of Washington DC, Maryland and Virginia. MayorOfDMV offers non-exclusive artist agreements, as well as full indie touring services. The Mayor books venues appropriate to each artist's genre and audience. He has worked with indie and major signed artists from all over the world (The Unites States, Europe, Jamaica) and in different stages of their career.One thing is still common to them all; they are all ready to advance their music careers. MayorOfDMV can assist with securing physical or online media distribution, sync licensing agency deals, booking regional North American tours, and help secure sponsorship/endorsement partnerships for artists. Although MayorOfDMV currently only books for his locality, many artists on his service roster have previously done international touring and are based overseas.

New York City Cooks With The Based God: Lil B Ether's a Sold Out Show At Santos Party House [PICS]

Shade45: Sway In The Morning SXSW