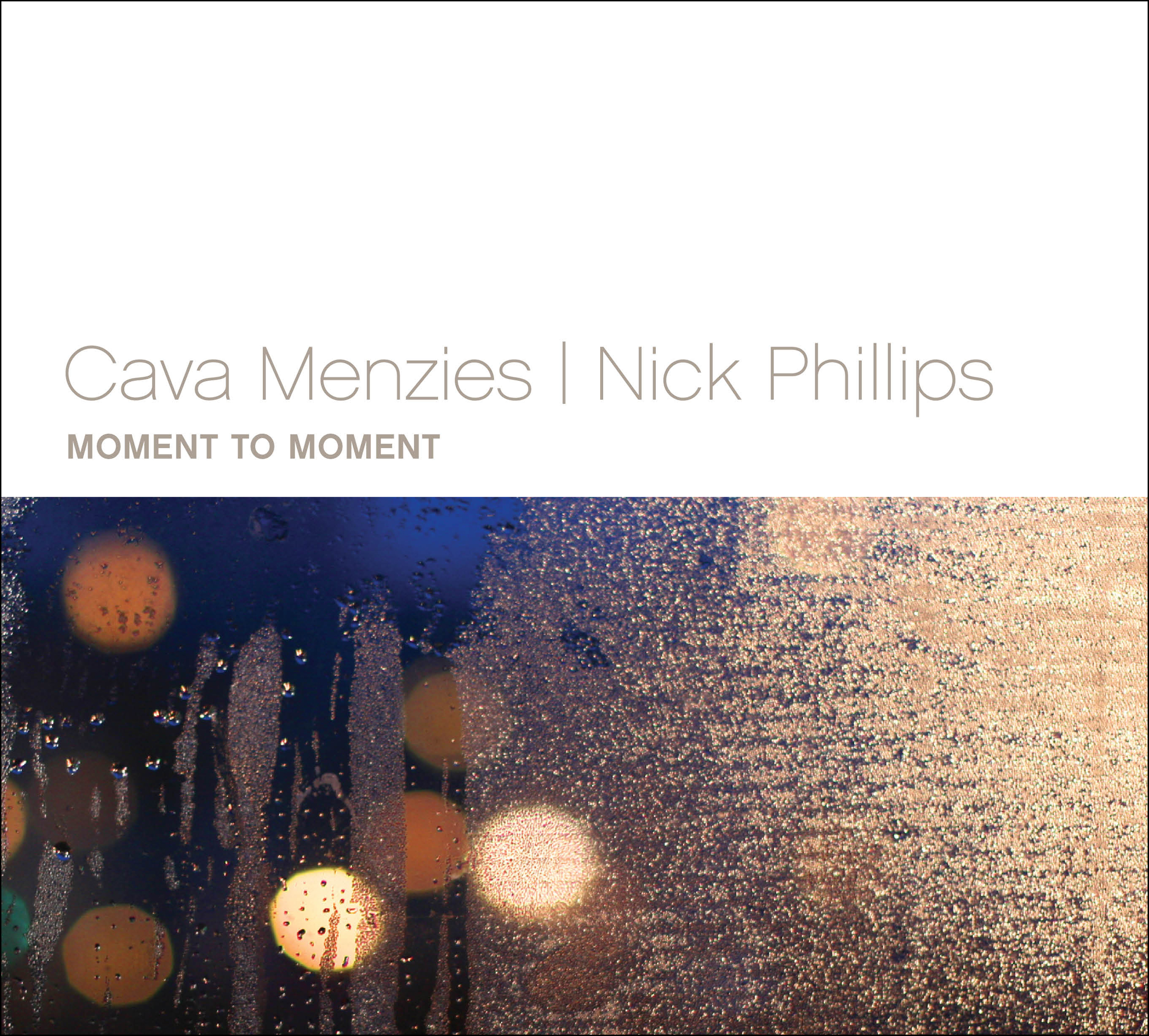 “A fabulous CD, the kind that find their way onto the ‘Best of Year’ lists."
All About Jazz

Ballads reign on Moment To Moment, the extraordinarily self-possessed new album by pianist Cava Menzies and trumpeter Nick Phillips. But this recording is much more than just a “ballads album.”

Many artists have produced albums filled with love songs and torch tunes at slow tempos; they’re designed to pull at the heartstrings, or turn up the nostalgia, or to highlight the introspective phrasemaking that ballads allow. But very few succeed at also doing what this album accomplishes. It creates a cocoon of space around the listener. It lowers the blood pressure; it slows the heartbeat; it seems to slow time itself. (If it weren’t so supremely musical, you might consider marketing it as a medical device.) On Moment To Moment, Menzies and Phillips locate their music very much in the present – in that space, Menzies explains, “where you have a moment to breathe.” And they transport their listeners to a place where each of those moments really counts.

“We’ve done all sorts of material in our gigs together,” Menzies points out, “but the ballads really brought out something special in our playing – a gentleness. At a house concert we did about a year before the recording, we played a duo version of ‘You Don’t Know What Love Is,’ and at the end we were both weeping. It was so powerful emotionally; we feed off each other’s energy when we play, and we wanted to just go deeper and deeper.”

In repertoire drawn primarily from the jazz catalog as well as the Great American Songbook, Menzies and Phillips – joined by the tastefully simpatico rhythm team of bassist Jeff Chambers and drummer Jaz Sawyer – go far beneath the surface of the melody lines and chord changes. Their improvisations have a quiet wakefulness, a deceptive simplicity that reveals a carefully constructed, unassuming majesty. Together, they follow the advice of Miles Davis in not only knowing what to play but also, more important, what to leave out. And their instrumental lines dovetail with an ease that would normally bespeak years of collaboration.

Which makes it all the more surprising that Menzies and Phillips first met in July, 2012; their partnership is still in its infancy, and this album represents their recording debut as a collaborative duo.

“I had this regular restaurant gig,” Menzies recalls, “and our vocalist couldn’t make it one night. The bassist recommended Nick, and we just had this magical musical chemistry. The more gigs we did together, the more we realized that we had so much in common.” Adds Phillips: “In that first meeting, it was surprising to me how instantly compatible Cava and I were musically. The subtle nuances, the phrasing, the way we both leave space in our playing to let the music breathe – it was all there.”

Equally shocking, to Menzies, was the revelation that Phillips had essentially stopped playing the trumpet in the years leading up to their introduction. “I’ve been a performing musician on the side throughout much of my career, but I really had to put that on the back burner for a while, given the demands of my day job,” Phillips explains. Menzies remembers thinking that Phillips must be a busy working musician, given what she was hearing on stage. “So I was shocked when we chatted after the gig and he told me that he had put the trumpet aside. I started urging him to play more – to use this incredible gift he has, this incredible sound. It’s been beautiful to watch it develop.”

Neither Menzies nor Phillips makes a living through performance, but they each make a living in music. As a longtime staff producer and Vice President at Concord Music Group, Phillips has worked on hundreds of albums – by noted artists ranging from Karrin Allyson to Poncho Sanchez to Gary Burton – and overseen the label’s acclaimed jazz reissue program, where his personal involvement has elevated collections of work by such giants as Dave Brubeck, John Coltrane, Miles Davis, Bill Evans, and Thelonious Monk.

Menzies teaches music to kids in grades 6 through 12 at the Oakland (CA) School for the Arts, where she chairs the vocal and instrumental music departments and conducts the school choirs; what's more, she can lean on a rich family history. Her grandmother danced at the legendary Cotton Club in New York (the home of Duke Ellington and Cab Calloway); her mother is a classically trained flutist; and Menzies’ father, trumpeter Eddie Henderson, was a founding member of the legendary Herbie Hancock Sextet in the late 1960s, and has recorded nearly two dozen albums under his own name.

For both artists, their “day jobs” strongly inform their music. "I think this project benefited from my experience as a record producer. That requires not only making the right choices to ensure the highest sound quality, but also knowing how to create a relaxed, comfortable recording environment for musicians, to allow the music to flow effortlessly," Phillips says. "I had the rare experience of working with some of the greatest living jazz artists on their recording projects, and also spending countless hours listening and digging deeply into recordings by some of the most important artists in the history of the music. It’s all made for a lifetime's worth of profound musical lessons that are deep in my DNA." His work at Concord left little time to pursue performance engagements. “But when I played that first gig with Cava, I knew right there and then that I had to make my trumpet playing a bigger priority.”

For Cava, teaching singers has had a significant impact on her own instrumental work. “I sang a lot when I was younger,” she explains, before choosing to focus on the piano in her mid-20s. “And I think that what I coach in vocalists informs my playing, in terms of letting the emotions out. It’s the lyrical element. The program [at OSA] is famous for producing great musicians, but our signature is the stage presence and emotional quality of these performers. So while I really care about my touch at the piano, I’m also concerned with the energy behind the phrases. It’s about sincerity and authenticity in your delivery: how honest and vulnerable can you get up there?”

Quite a lot, if Moment To Moment is any indication.

“It’s a very, very moody album,” Menzies remarks. “Not in a negative way, but ‘moody’ in that it’s the type of album where you sit and reflect on life. There are moments in which it plays with both dark and light. It’s moody in that way, and it really tries to capture the range of human emotion – the emotion that you feel just moving through life.”