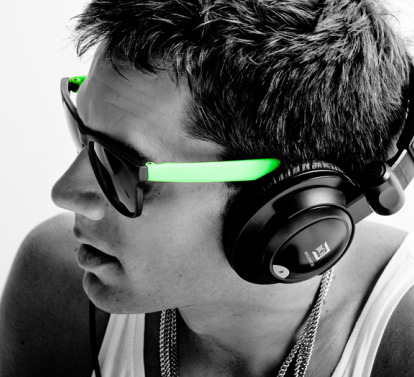 In recent years, hip-hop and electronic music have inched ever closer to each other, cross pollinating healthy scenes for a fresh sound that is winning over countless fans of both genres. Yet few rappers have effortlessly melded true lyricism with house and electro-infused beats….until now.

Nationwide, young fans are responding. Na Palm is on the rise and is buzzing beyond Chicago this year, thanks to his infectious, pulsing “Two Days Straight,” whose forthcoming video boasts a cameo from friend and fellow pioneer in the electronic-rap scene, Flo Rida.

“We usually like to go 10 days straight but we had to tone it down a little bit,” he jokes of the track, whose sex-soaked, ready-for-the-club feel has made it a go-to underground record for the party set.

“We have a genuine appreciation for electronic music,” Na Plalm says. “We’re finally starting to see that it’s here in America and we’re glad it is.”

To be sure, Na Palm and his crew don’t need to look to Stockholm or Miami for inspiration. Chicago’s healthy rap and house music scenes set the stage for Na Palm to explode years ago.

“What really influenced me was the underground house music scene in Chicago,” he explains. "I started out performing at clubs where my friends DJ-ed, like Stone Lotus and Spybar, so I naturally tried to make music that kept the tempo of the club up."

An early example of that fresh fusion is the previously released “Go Go Girl.” The track, which features vocals by Ben One, recalls the best of progressive house artists such as Kaskade, while still managing to stay hip-hop at heart. It’s a trance-soaked, addictive mélange that did not go unnoticed (MTV’s “The Hills” used the track last year in an episode).

Over the past two years, Na Palm has taken his message from the underground Chicago club scene to the rest of the country: performing live to new and older fans alike via opening up for larger artists and headlining college shows.

In 2010, he was rewarded for logging months on the road via passing the 200,000 “fans” mark on Facebook gained largely through touring: no small achievement for an independent artist.

This year, the rapper has set his sights even higher, and “Late At Night” delivers dirty beats sure to reward those down with Na Palm from day one. The mixtape crackles with energy, from the pop-tinged hardcore flow of “Let It Go” to the Cool & Dre produced “Things I Haven't Told You,” featuring up and coming Memphis rapper Don Trip, to the piano-driven “Outta Here.” The Nitti-produced "Going, Going, Gone" provides further evidence of exactly how big Na Palm’s mixtape is. The synth heavy track features Na Palm at his best reflecting on how his life has changed while focusing on what the future will entail as his career begins to take off.

“I keep my shit positive and I stay in my lane. I’m just doing what I do…rapping about girls, partying and the struggle to come up, over the music that inspires me,” he says.

That party is rapidly heating up for Na Palm in 2011, and all of the World is invited.

LMFAO and Na Palm will be performing together live this week at Southern Illinois University and Western Michigan University! Get your tickets quick before they sell out: http://www.hottestcollegeparties.com/events/

Straight from the studio! Our fellow Chicagoans, Soundpusher just dropped a ridic remix of Na Palm's smash hit "Whats Yo Name"! Check out the Youtube link below http://www.youtube.com/watch?v=vG7zYtYbFWA

Na Palm will be performing live in Playa Del Carmen, Mexico at the Utopia Music Festival on NYE 2011! 5 days of beats, beaches, parties and sun! Get your tickets to join us for an unforgettable New Years Eve on the beach! Tickets available here: (http://utopianye-NaPalm.eventbrite.com

Mike Posner and Na Palm packed the house at V-Live in Chicago on 4/25/2010. Mike Posner performed his hit single "Cooler Than Me" right after Na Palm torched the stage with his hit single "What's Yo Name". Both Mike and Nay really knew how to control this V-Live crowd.

Na Palm shares the stage with Tiesto in one of Chicago's biggest social magazines IMAGE in their latest AUGUST music publication. The interview really gives the reader an inside look at the party rapper, outside of the booth. http://issuu.com/imagechicago/docs/image_august

Na Palm on MTV's "The Hills"

Na Palm received a phone call from the MTV Music Director telling him they wanted to use Na Palm's hit song "Go Go Girl" on an episode of MTV's "The Hills".

Tricoastal Records has released the first two week schedule for Na Palm's Fall Tour. Click on the shows tab to see the dates. Book Na Palm for a concert in your city! Email booknapalm@gmail.com to get a date reserved

Na Palm is set to kick off his debut national tour this wednesday as the team takes off to their first stop in Winston Salem, North Carolina. This fall, Na Palm will be performing alongside Sam Adams, Wiz Khalifa, Big Sean and many others.

This past weekend, Na Palm was voted the number 1 artist among a list of over 100 different acts from around the country. The contest lasted for 10 days and after calling his fans to action via various social media networks, Na Palm racked up a whopping 1835 votes. Na Palm is now slated to compete against other top voted artists at the Tonic Room on Aug 26th for a final chance to share the stage with Nas, Chemical Brothers, Benny Benassi, and other highly acclaimed international artists. Check out Northcoastfestival.com for more information
Back

Presented by Emma Giordano and DirtyMexicanLemonade.com

Tickets and More Information
Update Required To play the media you will need to either update your browser to a recent version or update your Flash plugin.
Download Download