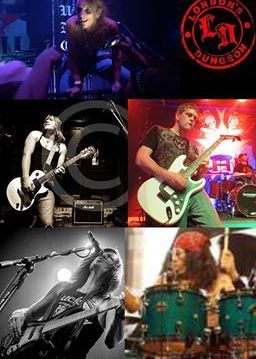 London's Dungeon has been fortunate enough to share the stage with many well known artists.
Some of the highlights have included festivals, special appearances, and many shows.
A few worth mentioning are as follows:

A sold out show at the world famous "Whisky a Go Go" with Hardcore Superstar.

A mini tour from Dallas to New Mexico with Crashdiet.

Direct support for The Misfits

London's Dungeon has been busy preparing for the 2016 shows, tour, and new opportunities.

Their journey so far has been exciting, and they've had several powerful performances.

Highlights were a sold out show in LA at the Whisky-A-Go-Go with Hardcore Superstar, followed up with a stellar performance at Rocklahoma that got local television coverage, & a huge turn out for the show with Lita Ford on Valentine's Day.

London’s Dungeon is ready to get back on the road with a new line up of extraordinary talent. They will be performing, once again, at the Rocklahoma festival that is celebrating it’s 10th anniversary.

They are pleased to welcome Talon Blaque on drums. Talon is not only an award winning, professional touring drummer with outstanding credentials, he’s also no stranger to production and knows the ins and outs of the business.

Talon has shared the stage and the road with many reputable bands, & comes fully endorsed & highly recommended by several well known artists & companies. His proven track record and skills are a welcome sight.
London & Talon have been friends for years, & have often talked of working together. Now is that time.

Also joining the stage with London again is pro bassist Jason Cornwell. “JC", as most people call him, is best known for his time spent with several Boston bands, & his work with Eric Martin of the 80’s band “Mr. Big”.

JC joined London’s Dungeon last year on the Retrospect Records stage at the Rocklahoma festival. It was then they knew he would be a perfect fit for the new line up. JC has his own style, and is known for his “3 finger picking” technique. He has lots of fans across the US & beyond.
We welcome the "Boston Bassman!"

Pete Franco has taken the position on lead guitar, although his talent doesn’t end there. Pete also plays bass and drums, & is a genius in the studio behind the scenes. He has worked with Grammy nominated producers.

Pete started playing guitar at 8 years old, learning from a bluegrass instructor. Then followed with a few years of classical lessons. He eventually ended up in Hollywood for ten years playing in all the best venues, & learning engineering tricks from the pros. His knowledge of music in general is quite impressive.
Architect by day, musician for life.

Last but not least, rhythm guitarist, Cody Joe Pope.
Cody Joe is Texas born & bred. He’s been playing guitar most of his life, & performing since age 15.

Cody Joe first met London several years ago. Cody was barely 21. He’s been playing shows all over, & has grown into a wonderful performer. He comes from a more blues & country background, but loves rock n roll just as much.

London, & those close to the band, carefully selected these guys.
They’re looking forward to touring, some special appearances, festivals, & much more this year. Thank you to so many of you that have reached out to support, book them, & follow them.

See you all soon!