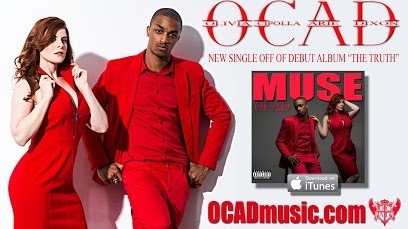 Olivia Cipolla and Arie Dixon, incredible songwriters and performers. Their Debut Album, “The Truth” now on iTunes, has gained a world wide following, with their single “Muse” starting a plethora of dance videos by fans and choreographers world wide.

Olivia has performed with the top acts in music today — Beyonce, Jennifer Lopez, Usher, Lady Gaga and more, and has appeared in major films and television, including Oprah's Last Show, the MTV VMAs, the Billboard Awards, the American Music Awards and more. She was featured on Heavy D's last album, Vibes, and, on stage, was in the opening cast of Jerry Mitchell's acclaimed new musical in Las Vegas. She is a show-stopping, electric singer, dancer, actor-model, songwriter and choreographer.

Arie Dixon is a prolific and multi-talented songwriter, producer and performer with a massive following from his mix-tape releases. His music videos “Arie Dixon is My Name” , “In My Own World”, and “F*ck The Other Side” have put him in a lane of his own. He is a winner of countless Hip-Hop competitions including 2 racks, Thisis50 The Training Camp, Raise the Bar and others, and his powerful live performances have generated a huge New York audience. With his production of The Truth Album, he has become one of today’s “Need to look out for” up-and-coming artists. Together as O.C.A.D. Olivia and Arie have taken the world by storm with the release of their debut album, THE TRUTH, and their first video single — “MUSE” — Now on Vevo and MTV.com

Come Join and interact with us on Google Plus

Please do twit of post to us on facebook we love to chat with you and appericate the fan support and feedback.

@ocadmusic is performing this Tuesday Nov 19th at Santos Party House. Come hear some new music! Doors open at 8pm. It's a Free show = free fun & ladies don't be afraid to wear ya pumps & booty shorts & dance with with us too!! Let's live a little! See you there!!