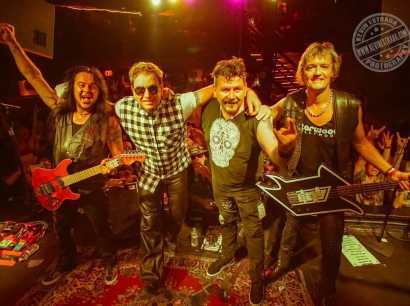 In the heady days of 1980s Los Angeles, the concert stages Odin played were a killing floor in the band’s meteoric rise to become the most dominant hard rock/metal act of the west coast southland. An unstoppable force that sold out nearly every major venue in the sprawling metropolis of Los Angeles, including The Roxy, Whisky A-Go-Go, The Troubadour, and Chuck Landis’ Country Club, Odin is the only unsigned band as a headliner to have shattered attendance records on multiple nights at both Gazarri’s on the Sunset Strip and The Palace (now The Avalon). By the time their landmark "Don’t Take No For An Answer" Ep was released, Odin had landed lucrative opening slots for some of the most successful bands of the era including Warrant, W.A.S.P., Ratt, Tesla, Dokken, Armored Saint, Bang Tango and Keel.

Odin’s popularity reached a whole new level of stratospheric heights when the band released The Gods Must Be Crazy Ep in ’86. The opening cut on the record is “Little Gypsy.” A hot-blooded paean to the seductive women who packed the band’s live shows in droves, “Little Gypsy” and Odin are featured front and center in Penelope Spherris’ classic documentary, The Decline Of Western Civilization Part II: The Metal Years.,Recorded the same year as The Gods Must Be Crazy, Odin’s first full length disc, "Fight For Your Life", was released on Japan’s JVC/Victor label which contains the song "12 O'Clock High" also featured in "Decline Of Western Civilization: The Metal Years".   The sun shone brighter and the flames burned higher when Odin booked what were supposed to be three final shows at Gazarri’s before relinquishing their reign. All three nights sold out in record time. Odin was put to rest, but the solar eye remained open. Hunger for the band’s music went undiminished even as various members sought new musical allies.

Odin has performed recently at festivals such as Rocklahoma and the Hair Nation Festival as well as an apperence on the Monsters Of Rock Cruise. Odin is gearing up for many more live shows and re-releases of thier records.