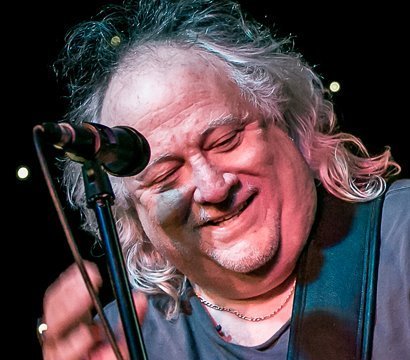 Deeply rooted, but not mired in, the historic Jersey Shore music scene, Pat Guadagno's genre defying music has been featured in Film's, Documentaries and the Emmy Award-winning SHOWTIME series CALIFORNICATION. He has cultivated a loyal, international audience with unique interpretations of other artists’ work, which is prominent in both his recordings and Stage Shows, where he creates reverent, theatrical celebrations of the music of Tom Waits, Van Morrison, John Prine and Bob Dylan.

Guadagno performs, Solo, with a band and often, with former E Street Percussionist Richard Blackwell, whom Springsteen calls "The Pope of Cool" in his Born to Run Biography.

Escaping The warrior winds of winter ', the well-traveled troubadour schedules performances, in Key West, Zihuatanejo, Turks & Cacos, Rincon, and Barbados, entertaining audiences and annoying golfers in a lifelong attempt to break 100, and the dress code at Golf Courses around the world.

"What sets him apart is his refusal to perform these songs in anything resembling their original style, and his effortless intuitiveness gives Old songs New meanings.” - Acoustic Guitar World

“From raucous, invigorated strumming to tender finger-picking a showcase of Guadagno’s mastery of the acoustic guitar. What sets him apart is his refusal to perform the covers in anything resembling their original style, and his effortless intuitiveness gives them new meanings.” - Acoustic Guitar World

Memorial Day weekend 2016 kicks off on Thursday May 26th when BobFest, comes to the Count Basie Theater. The 18 year tradition known as Red Banks hippest event, will celebrate Bob Dylan’s 75th birthday, and the release anniversary of the landmark double-album (the first in Rock History) Blonde on Blonde. Recorded in Nashville 50 years ago, Blonde on Blonde is regarded by many critics as Dylan’s best work. With his legendary band, Tired Horses, Guadagno will take you on a musical journey through the sublime, the surreal and the silly songs of the record Rolling Stone Magazine lists among the top 10 albums of all time.

When Performing is its Own Reward- The NY Times

A Well traveled troubadour  that takes the listener on a musical journey , alway a Magical Ride.

the music of Bob Dylan Pat Guadagno and Tired Horses

Astral Weeks and Beyond

The Heart of Saturday Night

The brilliance of Tom Waits

A Marvelous Night - the music of Van Morrison

The Music of Tom Waits