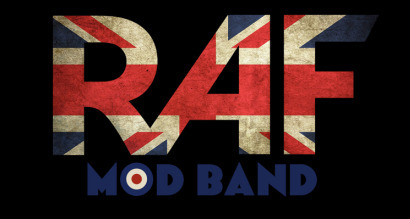 RAF was formed in 2011 with a simple goal - create punchy, danceable, music with as much style and attitude as possible. This is Mod music from Across the Pond. A full frontal assault of catchy 3 minute songs delivered in sharp suits and vintage instruments. No standing around.  The foursome of lads includes Chris Rich (guitar & vox), John Crawford (bass & vox), Josh Millman (guitar & vox) and Brad Pharis (drums). Come be a part of "The British Inversion." We are the Mods!

“For being new on the scene, these guys sure are making a splash! RAF, hailing from Portland (seriously, what is in the water out there?) are feeding the masses a very Mod revival infused sound that gets your feet stomping and your fists pumping. We are the Mods, indeed! Not only do they know how to get the party going, the group is made up of some of the sweetest, nicest guys a gal could ever know!”

“This particular RAF drop their bombs in the form of 3 minute, punchy, full on, danceable tunes delivered on an array of vintage instruments and sung with English accents… As the name suggests, well, states, they are a Mod band, one with leanings on the revival of 78/79, I am not quite sure that I would compare them to any particular band of that period, whilst the sounds they deliver fit in beautifully with that time, they have a distinctive sound of their own and a modern twist too giving them and the followers of that scene a fresh sound… The band are currently working on new songs which I am sure will be equally as exciting as the 4 that are currently available to listen to on their facebook page. Keep your eyes peeled on this band, I am sure we are going to see great things from them in the future, not that what we don't already have is great, of course!”

"For anyone who loves the revival period and a Mod & Proud attitude then this is the record for you (as well as me). With titles like ‘(It’s A) Modern World’, ‘We Are The Mods’ and ‘Ready Steady Go (Tonight)’ you have a flavour of exactly what you’ll be getting. This is hearts on their sleeves time."

"With a sound reminiscent of early Squire and some of the other ‘Mods Mayday ‘79’ bands (and others of that time) I find that I cannot recommend this release highly enough. Although this is the first time I have heard these songs, in a weird way it brings back memories of being in my mid-teens again."

Rumble on The River

The East End - Portland, OR

The East End - Portland, OR

The Star Theater - Portland, OR

The Gemini - Lake Oswego, OR

The Gemini - Lake Oswego, OR

The Crystal Ballroom - Portland, OR

The Star Theater - Portland, OR