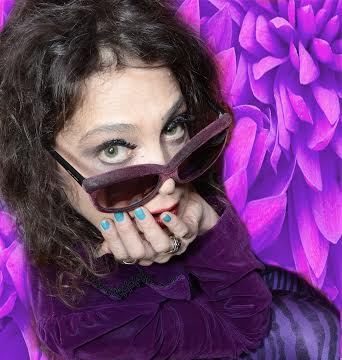 New York City Rew Starr is a songwriter, web show host, illustrator and actress.
Crowned Miss Underground NYC in 2017, and dubbed a “firebrand” by The New York Times, Rew channels equal parts Courtney Love and a gothic version of Olivia Benson from Law & Order. Rew is deeply rooted in the East Village music community, and comes from a family of troubadours. Her grandmother performed in Vaudeville, while her great grandmother ran a speakeasy in LES during prohibition. She is signed with Manta Ray Records and sponsored by Daisy Rock Guitars. Rew, is often called a female Lou Reed...Courtney Love singing w/ Dylan lyrics... .her song 'u suck' has won 'Best Punk Song of 2011' on Pirate Radio of the Treasure Coast & was featured on the Bad Girls Club. She works regularly with her yorkie, ZsaZsa Gabone and they have been in multiple music videos and films together.
ReW was featured on 'Love Lust or Run' w/ Stacy London as a musician artist. (TLC)

her band 'the Rewlettes' released Lulu's cover of 'to Sir With Love' and is getting worldwide attention. check out the video HERE and every stream gives 10 cents to

Described as a “Firebrand” by the New York Times, host, singer/songwriter

and gal-about-town ReW STaRR  is all about getting back up again. Her video 'aLota MiSTAkes' is her anthem. The video won the 'Akademia Music Award' for BEST POP ROCK ViDEO!

ReW was recently crowned Miss Underground NYC. You can see her coronation here ;)

'Miss House of Wine' with Manta Ray Records.  The song is a tribute to the documentary 'AMY' about the shattered superstar Amy Winehouse.

Manta Ray Records released her EP titled “a Proper Release”; it is available on itunes and all other usual places. The EP is a collection of songs from various sessions Rew has done over the years, with various producers, including Ramones producer Daniel Rey.

Rew , has been a presence in the east village music community for years , and has of

recent been in the national spotlight. Her song “U Suck “was featured on Bad Girls

club and was voted “Punk song of the Year” by Pirate radio on Treasure coast. Rew

even had an appearance on the TLC reality show “Love, Lust or Run w/ Stacy

London. On the show Rew, let Stacy put her through the makeover process, but still

kept her defiant, rebellious personality intact and in the end was teaching Stacy a

Her appearance on the show, caught the attention of Manta Ray Records president,

Mike Diamond, who contacted Rew about releasing her music and working with her

on some new material. “We are very excited to have Rew aboard and hope to help

her create more great music” said Diamond. She is currently in the studio whipping out some new treats.

Her song 'u persued me' won the Atlas Media songwriting contest, and ‘skeletonz’ was a semi finalist on Little Steven’s Underground on Sirius radio & the video was shot by director Eric Enright. Her songz *i don’t wanna* and *addicted 2 sleaze* are featured in the documentary “All’s Well & Fair”, by film maker Luci Westphal, and songs ‘lie 2 u’ and ‘u persued me’ are featured in the indie film ‘SECRET SHARE’ from Boy With Stick Productions. Rew* is a core organizer and performer for the Girls Rock Girls Rule Tour and the international MAMAPALOOZA festival. ReW has worked with children and music for over a decade and performs with ‘Musicians On Call’ in pediatric hospitals. She recently finished touring in the UK iand looks forward to return soon. Rew* performs regularly in her hometown of NYC, tours the USA and has also performed at world-renowned festivals like SXSW, CMJ, and Jazzfest. “This is what you moved to NYC for...” (Village Voice)

Now ReW has been spending her days acting , many of her film projects are currently in film festivals around the world and her stage work is growing constantly.

ReW has filmed at over ten indie films this past year!!!

If you’re looking for the next big thing, to meet the legends, or to hear the

music now influencing star-makers, check the archives of “ReW & WhO”  which needs to be on your radar.

The ReWlettes To Release Highly Anticipated New Cover Video For “To Sir, with Love” On 1/23/21 To Benefit Feed The Children

By Marlowe B West article about ReW here

ReW STaRR in aLL MaGaZINE

Jimmy Gunz get real with ReW

the Examiner/ A Converstion with Rew Starr

EV Grieve/ Out and About in the East Village