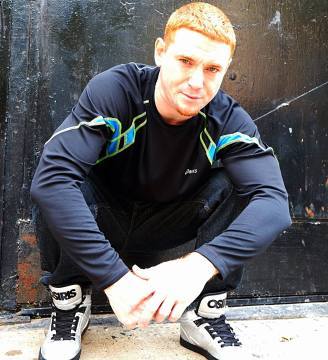 REDRUM was born in Staten Island, New York and was known for his ability to tell stories and entertain crowds with his Irish wit.

He grew up in section 8 housing where he struggled to get by. Plagued with being looked at as different , he would find getting creative and unique with word play against all comers would silence the question of what he was made of. Ballplayer turned Rapper at a young age , he got into Graffiti ,had beef on the street and was in and out of trouble with the law and had to make a decision where his life was heading, He chose Music.. Beatboxing since a kid, he learned to vent through his lyrics and would spark freestyle cyphers everywhere he went. He started out as a battle Rapper, then put a group together and eventually went Solo..

Through trials and tribulations in and out of hospitals following the rappers brushes with death from a tragic accident and battling depression, he would carve out new lyrics to his life to reflect the unforeseen and inspiration learned by not giving up. He signed a two year licensing deal with "Missing link Music". He released his single on Mekanizm Productions. ​

REDRUM performed at clubs such as "Soul Cafe", "Club Speed", "The Remote Lounge", even performing for the Coast Guard in Staten island N.Y's "Fort Wadsworth". He toured around the United States with Grammy Award winning Recording Artist and Guitarist -"Vernon Reid" & D.J Logic,performing at clubs like "the Fox" , "Troubador", The Orange Peel, "Georgia Theater", and "Tipitina's", as well as hoping on a track with Rap Legend "Slick Rick" on their album "Front end Lifter. He opened up for "Showbiz and A.G" at the First ever "Bronx Fest" with Hot 97 and Power 105 in attendence, Hosted by "A&R Fence". Along with being on Mixtapes hosted by - Dj Vlad , Dj Khaled, "Bedtyme 357" and Coast2Coast Mixtapes. He's also been featured in Canada's "Peace Magazine",Online magazines "Juniors Cave". ​ After surviving his operation he promoted his story in XXL Magazine's Jan. Feb. and March issues with his own money in 2010. REDRUM put out his Debut Album "The Side You Don't See" July 29th, 2010 with production from "Rockwilder" and D12's "Mr. Porter". He dropped his Debut Video "When I'm with You" and followed up with the "Time to Retaliate" Video. In 2012 writing new songs, in the studio recording collaborations and dropping unreleased tracks. In 2013- 2014 back from hiatus ,REDRUM recorded all new material , working with new producers, and performing shows across the Tri-State. In 2015 Redrum released his "I Burn" EP produced by Corbett and Video and Later in the year released his New Mixtape "Crack the Surface" featuring grammy nominated artist Melodiq, along with Mic Handz & Napoleon da legend Available for free download AudioMack.com . In 2016 He released his new video "Crash Symphony" filmed entirely at South by South West 2016 where he performed on The Writters Block Tour, He's featured on mixtapes by Dj Crank, Dj Pressure, feat. on Definition of Fresh, Spit Fire, Rap Attack & more. In June Releasing his new single "Conquer Fear Conquer Fate" produced by Sinima.