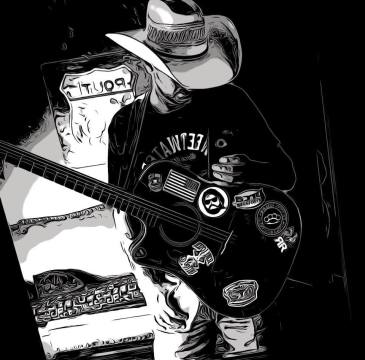 RICKY FUGITT - BIO
"It was the rodeo scene that meshed me with the music I love to hear. It was full of influences that made me want to write music that not just others, but I myself would like to listen to as well.  I try and reflect on the vibe you get behind the chutes.  Not reflecting on just the words and phrases of the sport of rodeo, but the feeling you get having a backstage pass to a unique lifestyle.  It's a mix of emotions, but it's everything that is true to the moment.  That is what I think defines me and my music."

Ricky's real breakthrough came in the summer of 2008 when he released his first single entitled 'Red Dirt Music' that was quickly picked up by radio in Texas, Oklahoma and Kansas.  "Red Dirt Music" debuted on the Texas Charts and landed Ricky nominations with TOSSM (Now BigStar97)  Radio as FAVORITE UP AND COMING TEXAS MUSIC ARTIST as well as, TOP MALE VOCALIST.  The new single charted at #2 on the TOSSM Music Most Requested Chart for 2009.  Ricky has since released singles - "Another Country Song" that landed him a spot on the Sportsman's Channel as the Theme Song for INNERLOC OUT THERE, as well as "One More Day" that was showcased in retiriring PBR Superstar Chris Shivers Last Ride video.  Two more singles - "Top Shelf Whiskey" and "Cursed Town" rounded out the releases off the CURSED TOWN album.

Ricky was signed to Oklahoma Indie Red Dirt Label CIMSOUND RECORDS in 2012, and teamed up with Producer/Engineer Jeff Parker (Cross Canadian Ragweed, Jason Boland), on his first studio album "CURSED TOWN" Ricky's most recent single "Texas Or Tennessee" hit radio in April of 2015.  The first off the album "Troubadour Soul" which was released on June 15th, 2015.

"I have a great group of seasoned people in this business in my corner, and for that I am absolutely blessed.  From the venues to radio, the fans and friends, I appreciate you to no end." RF

For A Great Cause!!! Acoustic Show

Filming for Innerlocs Out There

The Port Of Wichita (Full Band)

W/ JB and The Moonshine Band

Party In The Park w/Jason Boland and the Stragglers

Mulligan’s On The Lake (Acoustic)

Mulligan's On The Lake (Full Band)

Harvey County Fair (The Barn Beer Garden) Before and After Rodeo