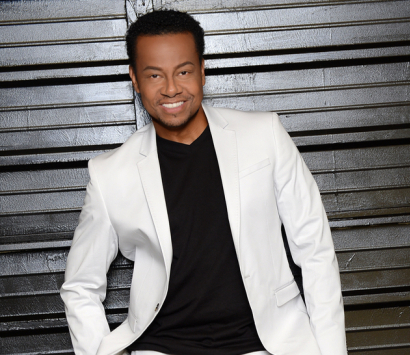 Robert Gee is a native son of Philadelphia, the "City Of Brotherly Love" and a proud heir to the Sound Of Soul..

A highly energetic multifaceted entertainer, Gee has successfully mastered Musical Theater, Pop, Jazz, R&B and has even been seen in a few Operas!

Robert is no stranger to the stage and his repertoire employs and showcases the range and depth of his talent.

Gee received the Best Male R&B Performer award in 2010 and 2018 from the Black Music Association, the 2016 AKADEMIA AWARD for Best R&B/Soul CD and several other nominations.

This NAACP Theater Award nominee has stared in several musical theater productions such as PIPPIN, The Wiz, Ain't Misbehavin, Jesus Christ Superstar, Dreamgirls, Sy Coleman's The Life and most recently Blues In The Night in Los Angeles.

As a background artist Robert has been seen supporting some of R&B and Gospel's finest like Vesta Williams, Kashif, Loose Ends Feat. Jane Eugene, Tevin Campbell, Teena Marie, The Emotions, Be Be Winans, Rev. Darryl Coley, LeShun Pace and more!

Gee toured heavily with the legendary London Soul Group Loose Ends Feat. Jane Eugene. For the 2017 and 2018  winter mid Atlantic/East coast tour Robert was the opening act at BB Kings in New York, the Howard Theater Washington DC, Bethesda Blues & Jazz Club in Maryland and the Chicago as well as Memphis City Winery's performing to sold out or near capacity crowds!

His 2008 debut independent release All My Love critically acclaimed internationally. Two songs from the disc, the title track "All My Love" and "Here We Go" were feature in the Indie film "Misunderstandings". Here We Go rocked the #1 spot for 3 weeks on London's Morpheus Soul Show radio summer2008!

After many years as a performer and student of his craft, Robert has become a vocal coach to several young students and even some of his mentors like the late Kashif, the late Vesta Williams and Jane Eugene From Loose Ends!

Robert was briefly signed to Spectra Records 2014-15 and released one single "All This Love (Is For You).

Optimistic about his future, Gee has released his sophomore project Robert Gee The EP with single "All I Ever Wanted" with an official music video playing on the Vevo channel and CMC The California Music Channel. The single landed on the 2016 Grammy consideration ballot for "Best Traditional R&B Performance"! The follow up single release "I've Given You My Best" also made this years Grammy consideration ballot and was an instant UK Soul fan favorite and landed at #10 on the  UK Soul Chart and at #16 in the "Best Of 2016 -  Franklin Sinclairs Top 40 It took the Top 5 spot on the Indie Soul Chart and the #28 spot on the Smooth Jazz Network Top 40 Chart. Gee was introduced to the SIRIUS XM listeners when his single "All I Ever Wanted" debuted on SIRIUS XM's  Heart & Soul on 1/22/17 to an overwhelming response! Robert closed 2017 with a dynamic 6 city sold out tour with Loose Ends Feat. Jane Eugene as the opening act! As the 2018 Black Music Association Best R&B Male Performance winner it is clear that Robert Gee is an emerging artist who's star is still on the rise! Robert last stared in the hit musical "Blues In The Night" in 2019! After the world paused in 2020, Robert now resides across the pond in London! "My music has always been recieved well in Europe, particularly the UK and Asia. But now Germany, the Netherlands and China are showing me love. I'm here for it all! I am excited to see what magic I can conjur up with new producers and writers to colab with! Robert is available for International touring, sessions, motion pictures, television! This is no doubt another exciteing, new musical chapter in the making for this Soul man and 2022 does not disappoint! Robert has colaborated with artist Luman Child again and this time they have a hot, uptempo funk track titled GRATEFUL that's from Liman Childs new EP release "Love Is The Message" on Tru Thoughts Records! The lead single landed at #3 on the UK SOULBREAKERS 4/July/2022 CHART!!! It's an upbeat song full of inspiration and hope. Available everywhere digitally now.