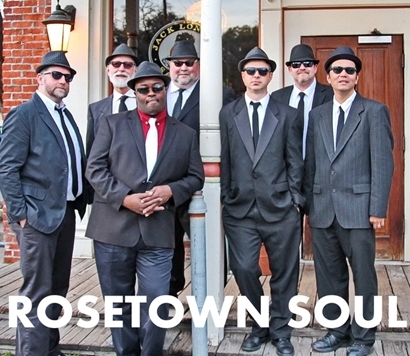 ROSETOWN Soul and R&B Revue is a 7 piece "Blues Brothers" inspired soul band complete with black suit and tie, fedoras, and of course dark sunglasses. We specialize in breathing new life to favorite soul classics. From Otis Redding to Wilson Pickett, STAX to MOTOWN we bring entertainment and energy to your event. Our music appeals to a wide audience and is perfect for events, fundraisers, festivals, and private parties.

In demand since 2012, ROSETOWN has been providing featured entertainment around the North Bay, performing at Corporate Events, County Fairs, Casinos, Weddings, Summer Concert Series and more.

ROSETOWN has one of the hottest horn sections in Sonoma County that include pro’s who have played with many other hugely successful bay area acts.

David Schrader (Saxophone) has been playing professionally for over 40 years as a full time musician. He holds a degree in Music in Theory and Composition and has studied jazz with Joe Henderson. He has played with the San Francisco, Napa Valley, and Santa Rosa Symphonies. As well as, contemporary acts: Shade (jazz/rhythm & blues), and the Volker Strifler Band(blues/rock). David has been in bands that have won 6 NORBAYs (North Bay Music Awards) in the last 8 years and the 2008 Monterey Blues Festival Battle of the

Jim Passarell (Trumpet) is an incredibly talented multi-instrumentalist that has played professionally with some of the biggest names in music! Jim has played trumped with the likes of "The Temptations", "The Drifters", and "The Coasters" just to name a few. He has seen worldwide tours to Japan, Paris, and Hawaii. Jim has been the cornerstone of many other hugely successful bay area soul acts such as "Crossfire" and "CT and The Cruisers". And is now the heart and soul of ROSETOWN.

Angels In The Outfield Octoberfest

Calistoga Music In The Park

Calistoga Concerts In The Park

Calistoga Music in the Park